The IXUS 310 HS from Canon is a finest portable camera with lots of improvised features that would definitely hold the attention of almost all the photographer. The IXUS 310 HS secures high for picture quality and is one of the best touch controlled digital camera. It is that small to fit enough into most pockets. The outlook of the camera appears to be well designed with a solid build quality.

The LCD touch screen is very responsive. This is the area where the IXUS 310 HS can be compared well against many of its closest rivals. Canon has given four attractive and a bit unique colours and they are silver, brown, gold and pink. The features widely include a CMOS sensor, wider 24mm 4.4x optical zoom lens with an optical image stabilisation, 3.4 frames per second when used in the maximum resolution, recording of 1080p HD movie with high quality stereo sound and LCD touchscreen measuring 3.2 inch diagonally.

Those who are in search of a touch controlled digital camera and the preference mainly lies on the quality, then this camera is unbeatable.

Canon’s latest launch of IXUS 310 HS Digital Camera also continue to target photographers those who are not ready to compromise on fashionable features. This camera boasts the latest DIGIC 4 processor with integrated iSAPS technology, which technically means the camera analyses images while capturing and choose the apt scene mode for the situation. The latest generation processor boosts the performance when shooting and makes it easy to capture super slow motion movies at 240fps (frames per second) and high-speed burst stills. Its sensor has been improved the sensitivity and producing high quality images with less noise.

Touchscreen would not be the first choice of all photographers, especially when it comes to pocket zoom cameras. The reason behind this is compact cameras usually small where touch control may be a little tricky. Still the manufactures tend to go with the wind.

The touchscreen entirely occupies the rear potion accepting a single playback control to the left side of the bottom and a 3.2-inch size is convincingly large enough to portray a complete view. It has higher resolution of 461,000 dots to aid better visibility and clarity; in addition to that, the ratio of the widescreen is 16:9. As you would have thought, the camera puts forward an effective HD video besides stills and just like the same option in Cyber-shots from Sony’s touchscreen enabled, an exclusive red virtual button is provided for recording in the right side of the top most corner on the Canon’s screen for immediate accessing.

The chosen location is really impressive, though the user’s thumb sometimes pass through the recording button in the general handling process of the camera. The rear screen space is wasted and minimised with black ribbon like borders on both the left and right when shooting in regular 4:3 aspect ratio photos. The largest parts of the touchscreen selections are spread over the surface and difficult to understand the Primary view because of the black bands on either side. Quality of the video looks good with images captured by its actual colours and a reasonably faithful version of the image or footage through the lens.

We can say it takes some time for us to get familiar to the touchscreen response when selecting function modes which is just the same in almost all the touchscreen rivals in the market. While capturing a shot, we would tend to hold the camera straight in our hands, because of which the screen becomes dirty with fingers and thumb impressions.

Sometimes we have to repeat the stroke on the particular option on screen for getting the response faster. This makes us occasionally come down on our choices and fix into a separate shooting mode option just to save the time or a quick menu control to throw the users to enable key settings.

Its distinctive rounded edges and faceplate which bulges outward looks absolutely rich. Comparatively, it is bit bulkier than the competitive products. Still it is suitable for a handbag or a pocket carrying. It is well-built and light weight to carry. Build quality looks stunning with a robust stainless steel body which is meant to be solid and withstand the rigorous of daily life.

So, we are just free from worries and can be pretty sure about the life of a stainless steel. There is nothing seems to be a hold at the front of the camera, however a bit projected edge at the left side in the rear plate, to the least extend it pretends to be a grip and prevents the thump from accidentally slipping about which is  just the same what we experienced by our forefingers at the camera’s front. The dimensions measures 100.6 x 55.4 x 25mm and weighs 185g including a rechargeable battery and expandable memory card.

The top panel where we can find some physical control buttons moderately buried into the panel. It seems that it follows the same style in the sibling model of IXUS series 220 HS for this control, as in we can see a switch which is a alternate control between auto mode and program dial mode. Program Auto provides easy access to wide and broad degree on functional front and a wide range of shooting mode selections without surfing the main menu.

The main menu includes aperture priority modes following shutter with a single finger tap on the ‘P’ logo on the screen and a wide range of virtual button controlled digital filter on effects. In the rear, one and only physical control is playback button. For the rest of controls, we have to depend only on the camera’s touchscreen which dominates the entire back panel. Function buttons are shoved on the left side and right side of the display.

On the middle of the top is an indication light which shows the left over time for battery, the available capacity of images can be shot, the resolution selected for video and also shown the total capacity of recording which can be loaded or captured on the remaining memory.

On the main screen of Canon IXUS 310 HS Digital Camera, we have a sign of the shooting mode selected which we have already discussed. When selecting program mode a simple press on the icon shows six additional shooting mode options appearing on the screen as to select individually at the moment.

The initial screen displays program mode following the shutter mode and aperture priority as previously specified, a digest function for movies and solely designed predefined portrait. A tap on the right or left arrow key just like that brings the immediate screen of options which comes readily into view.

This is where we get to see smart shutter for detection face on the images to capture photos instantly and 3megapixel mode at the maximum speed. There is an image selection capturing a shot at the best rate from some unfortunate occasions like fire. Low light enabled night shots and fish eye are displayed after the previously mentioned options.

The following screen includes six options like cool miniature shoot mode which narrows focus to a innermost area of the screen to mimic the effect. The options extends like toneless or neutral, super bright and shots for posters. Just the same on other IXUS, Canon’s natural colour portraying and colour changing options are given under the title of my colors control.

We can also change the in-camera sharpening level in this my colors menu option as per our wish. And to conclude there is well-matched movie control and it is where we are on the last control given for setting shooting that includes two simple options and settings for slow movies. 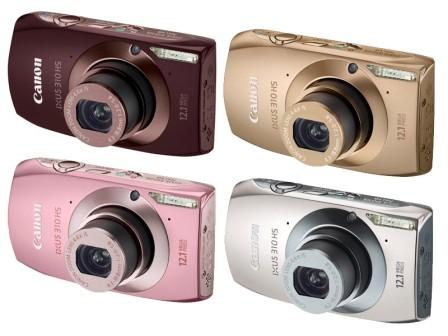 The IXUS 310 HS which shares the same resolution and sensor with the IXUS 220 HS has achievable image quality. Canon’s snapshot with very sharp detailed results impress us without fail. Though there is a slight loss of clarity or sharpness at the corner of frame captured at maximum wide angle. The camera by default biasing whatever is presented at the centre of frame, most of which are pleased with results. Its performance never drops appreciably when comes to low light shooting mode.

Three megapixel low light mode performance is likely to deliver sharp result. Noise, six different ISO settings are provided on the touchscreen enabled camera and it shows the noise level variations for each ISO setting.  Macro setting enables the camera to focus on a subject which is 3cms distant from the camera when the lens has been set to wide-angle. Flash settings are auto, flash on/off, slow synchronization, red-eye correction and red-eye lamp settings.

The maximum shutter speed is 15 seconds in the long shutter mode which is obviously good news for those who are interested in night photography.

High quality image is very much pleasing and depiction of natural colours to shots with sharp details. White balance performance is highly good under different range of lighting conditions. Noise reduction presented on the camera works great and keeps images clean though there is a loss of detail and contrast. Canon IXUS 310 HS does not disappoint anyone when considering quality of performance.

Canon IXUS 310 HS is exceptional in overall build quality added with a large screen. It is very much portable since it is less weight and fit for pockets. The quick responsiveness of the touchscreen would immediately attract the users. But there are some chances that some people who occasionally miss the physical button controls when they are in a hurry to locate a particular option. Full HD movie recording is one more added point. As discussed image quality is one such thing which throws slight discomfort in handling the camera.