For less than half the price of the, admittedly superb,  Panasonic SD2501 or SD2500 you can get your hands on this 18036 Breadmaker from Russell Hobbs – a fairly decent mid range bread maker that’s been around since early 2010.

Although it doesn’t have all the bells and whistles of some of the more expensive bread makers it does nonetheless consistently receive mostly positive reviews from it’s users. 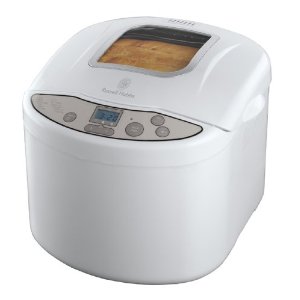 So what does it do?

It does the basics very well indeed making a reasonable loaf in a rather impressive 55mins.

It’s pretty straightforward to use and slightly less complicated than more expensive models (although, actually they’re all relatively simple to use once you’ve don’t it a couple of times). Like with pretty much every bread maker – or even manual bread recipe, measuring the ingredients exactly right can be the difference between success and failure. With a manually baked loaf – you can at least return the loaf to the oven if it needs bit longer – with a bread maker the timing is fixed, so be rigorous with your measurements and you shouldn’t have any problems. Unlike some other bread makers, this one doesn’t come with a measuring spoon – so if you don’t have your own I’d highly recommend getting a set.

I’ve not tried the cake making program but other users have reported that this was somewhat problematic with the centre of the cake being undercooked and the whole thing not really rising properly.

There are three crust settings, but in our experience you need to set it to the darkest setting if you want any real color in your loaf – the other 2 settings give a rather pale -albeit still entirely enjoyable loaf of bread.

The keep warm function is handy, allowing you to ignore the bread maker for up to an hour after it’s finished before things might start to get a big soggy. My experience is that it’s actually better to get the bread out as soon as it’s done – you have more chance of the blade coming free automatically and the crust develops better.

Another nice touch is the power interrupt/resume function – which will recover in the event of a power cut. We don’t tend to have too many of those nowadays – but possibly handy if you’re continually tripping fuses.

Should I buy it?

Available now from Amazon at under £50, if all you want is a simple little bread maker that produces decent bread and isn’t too hard to use then this might be the one for you.

Other Reviews for the Russell Hobbs 18036

A sample of reviews from other owners:

Very good value compared to some other models. A five ***** product.

I would recommend this breadmaker – it is affordable, easy to use if you follow the instructions and weigh ingredients accurately and will fill your home with a wonderful smell and your tummy with wonderful bread.