Complementing its higher end counterpart, Cuisinart TOB-195 Toaster Oven comes to satisfy those who look for sophisticated and easy to use oven but do not really need the convection feature. Its overall appearance is very promising.

With matte black stresses on all over its body, it’s very easy for everyone to guess that it’s a premium oven toaster made of highly valued stainless steel. Be careful, though, because what you see might be well too wrong. We’re going to review Cuisinart TOB-195 Toaster Oven into the details throughout this article. So, stick around because it’s your chance to get to know its flaw. 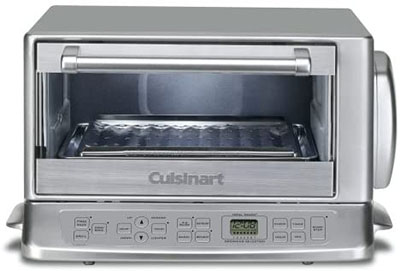 “Watch out! Your eyes can deceive you.” That’s what our old teacher used to teach us and that’s what you have to keep in mind when you’re observing Cuisinart TOB-195 Toaster Oven. Even though at a glance its body looks like being made of finely brushed stainless chrome, you’ll get surprised to discover that it’s actually a plastic.

Being this way, this oven will probably need special care from your end to preserve it because a slight crash might give it uneasy crack. Luckily though, the manufacturer protects all the purchases with 3-year warranty. On to the set of control buttons, we have to admit that the touchpad is cool.

In fact, it is the trademark of most Cuisineart’s oven. However, compared to turn-knob controls, these buttons are less intuitive. We mean sometimes it is annoying to have to push up to 4 different buttons just to bread you’ve just taken out of the fridge.

No one will be able to resist the large capacity it offers. With 0.6-cubic foot, even 6 slices of regular bread will slip in easily. It’s very handy when you want to serve big supper but are kind of limited in time. Moreover, with all the preset functions, you barely need to remember the recommended temperature when cooking some particular dishes. 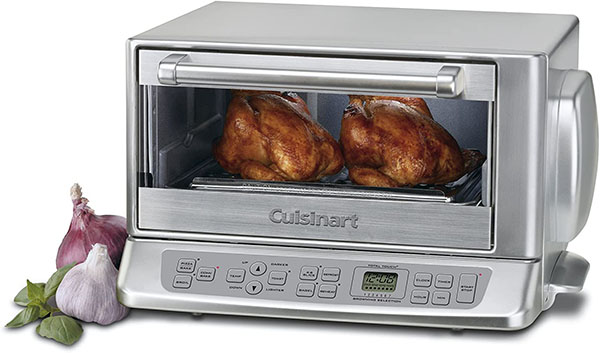 While it misses the convection baking, it still provides users with the useful pizza, broil, and toast buttons. Next to the display, you can further opt between bagel, defrost, and reheat functions. More precise and personalized cooking is possible as there are also buttons used to adjust the shade when toasting. All of them are nicely arranged in futuristic touchpad control which is the hallmark of all Cuisinart’s oven including the Cuisinart TOB-195 Toaster Oven.

The interior is coated with nonstick material. So it’s fairly easy to clean up. Slide out crumb tray is still provided but similar to the model with convection, you still need to turn it around to take it out because of the back-only access. There are two positions to place the racks. While it’s not as many as the one offered by Breville oven, it’s pretty nice to have it. The Cuisinart TOB-195 Toaster Oven’s box also contains some cooking manual, in case you don’t really know how to maximize your cooking.

The chrome accents do look beautiful and sturdy but kind of a letdown to know that it’s not made of stainless steel. The price is also a bit high for a countertop oven but looking at the features and technology, we think we can accept it. Therefore, our final verdict is that you should give Cuisinart TOB-195 Toaster Oven a shot.

How to choose the best paper shredder fitting