For a perfectly balance and weighted DE safety razor, I highly recommend the Edwin Jagger De89lbl. The long handle makes it easy for guys with small hands to use as well as those with larger hands.

As far as attention to aesthetics and detail, the Edwin Jagger De89lbl has a nice chrome plating, not the kind of plating you would expect from a cheap shaver, but the kind that really shows pride in craftsmanship. You can choose the handle either lined or smooth. Many guys prefer lined as it can help with grip.

A lot of guys initially get into wet shaving because they think it’s cool, and it is. But wet shaving has so many other benefits including saving money and the overall quality of shave. One thing the makes the Edwin Jagger De89lbl so exceptional is the perfect balance and weight.

Double edge razors are different than using a disposable. I’ve heard guys talk about how they resemble disposables but I can tell you the technique is totally different! If you are new to wet shaving and want to try a double edge out for the first time, you can’t go wrong with the Edwin Jagger De89lbl. However, be sure to watch a few YouTube videos to get the technique down. 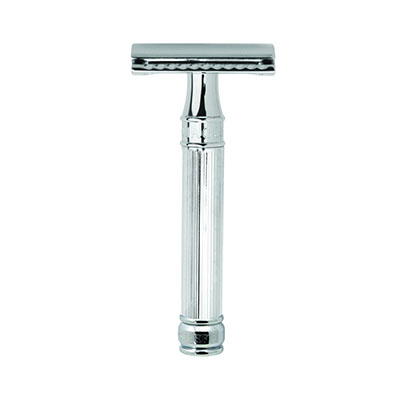 What I’m talking about in regards to technique, with disposables, they are light and require constant applied pressure to perform well. Safety razors are weighted. They require no pressure as the weight of the razor should be allowed to do the job as you gently glide the razor over the skin.

Regardless of how good a razor looks, you still need quality blades. The Edwin Jagger De89lbl comes with five Derby super stainless blades. Derby has a solid reputation for making quality blades though you can always change them out to suit your preference. The head on the Edwin Jagger fits all standard double edge blades.

The last point I’ll mention in regards to quality of shave with the Edwin Jagger De89lbl is the fact that it retains heat. While rinsing under hot water the metal heats up and retains the heat. This provides a nice feel while shaving and can’t be duplicated with a disposable or an electric shaver.

Some of the biggest brand names are of course Edwin Jagger and Merkur. Which one is better? It really depends. I hate answering questions like that but it really does depend and ultimately comes down to personal preference.

As far as quality, I think Edwin Jagger and Merkur or fairly matched. What I like about Edwin Jagger razors (as can be seen with the Edwin Jagger De89lbl) are the craftsmanship and the detailed focus on weight and balance. I’m not taking anything away from Merkur, they make some great razors, but that’s one thing I think Edwin Jagger beats them at, that little element of class.

Merkur is a German based company will Edwin Jagger is an English company. Not that it makes any difference as far as preference but I guess to some it might.

Out of nearly 1000 reviews from Amazon, the Edwin Jagger De89lbl received an average 4.7 rating out of a possible 5. Such a high rating out of so many reviews is unheard of and really speaks to the quality of this razor. Some of the comments guys made were:

“The razor itself is top quality- a beautiful chrome finish, a nice weight and very well manufactured” as well as, “Looks like it will last a lifetime so if it does it will really save me on cost from buying all those crappy disposable razors.”