It is quite obvious for Elgento to innovate products that improves the lifestyle with the thoughtful designing and high functional features. They promise to adhere to the strict quality control standards have been certified with the safety regulations approval. This toaster is in simplicity with the design and it has more features that is been detailed in the review that goes below.

Elgento E20005 2 Slice White Colour Toaster is a compact one which has white housing and it is made of high grade plastic material. This model is a nice to use device which is greater value for the design and structure. The control is also simple to use and it adds to the convenience of the user. The overall dimension is 19.1 x 19.1 x 27.4 cm which relates to the height, width and length and it weighs mere 1.2 kg. The interior elements are made of steel which is high in heat resistant. 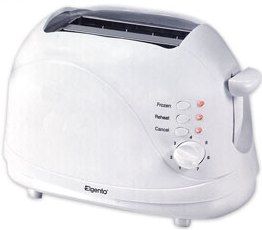 The rotary knob present lets you set the browning levels. The control of the level which lets the bread lower into the toaster and brings it up on the completion of the programme is present in the side. It has 3 indicators light which illuminates during the operation of the programme. It is possible to toast a couple of bread sizes in a single go as it comes with the 2 slots operation. To be noted is that both these slots function together and independent functioning is absent.

Present in Elgento E20005 Auto Pop-up Toaster are variable browning level which goes from 1 to 6 levels. The lighter side to the darkest side it goes ascending. The variations are simple and it works to satisfy each one’s desire. Making it more interesting is the setting of the browning levels which is simple with a rotary knob.

The prime toasting function makes it all the working of this toaster and the supported aspects of the controls are the following.

On the whole, Elgento E20005 Compact Toaster gives you a perfect toast along with many features however the features like bun warmer, digital control and bagel settings are absent.

How to choose the best paper shredder fitting