When it comes to wireless in-ear headphones, the main thing to look for is convenience. That’s one characteristic these Flexion headphones can boast of, among many others.

These headphones are perfect gym material, and they have been designed with a view to making dynamic people more independent of their phones. They’re geared towards commuters, people who like to workout, and men and women alike who have no problem with rubbing shoulders with noisy, bustling crowds.

They offer decent noise cancellation and they don’t compromise on size or quality to do it. Whatever the Bluetooth Flexon Kinetic headphones may lack in sonic boom, they make up for splendidly in chromatic oomph.

The best thing about the Flexion Kinetic Series Wireless Headphones is the size. The manufacturer boasts these are 60% smaller than competing models, and while this statement may be a bit brash, because there currently are similar sized headphones on the market, Kinetics are perhaps the most comfortable and compact you may find on the market this year. They are so light and they fit so snugly inside the ear that it would be all you could do to make them fall out. They are built for dynamic folk, and you can tell, because no matter how lively the workout, they just won’t budge. They reportedly work well when deadlifting, as well. So carry on jogging and stretching, because the Flexion Kinetic Series Wireless Headphones have got you covered.

The buttons are flush with the earpiece, but you can tell them apart very easily due the bright yellow colour which contrasts strongly with the black, glossy background. This weeds out those pesky command errors you might get with other headphones. The manufacturer calls the controls an interface, but don’t be fooled into believing you have an app for this headset. All they offer, and all you need, is to pair your headset with your device via Bluetooth, much as you have with other wireless accessories. So let’s stick to calling them remote buttons, because that’s all they really are, and they’re pretty good ones.

When it comes to colour, what you see is what you get. There’s a neon yellow cable the same colour as the buttons on the earpieces. Three sets of black earbuds and just as many sets of white earbuds of various sizes are there to help you customise your unit, making it even more stable than with the original bud. So, even people with freakishly small ear lobes will appreciate the versatility of these earbuds. 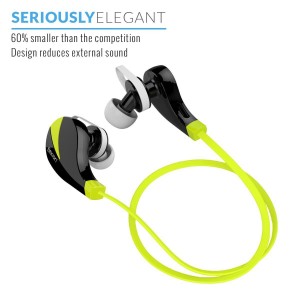 These headphones are built with convenience in mind, so while they may render decent sound, they don’t specifically set out to blow you away with it. Not everyone is a fan of the equalisation they offer, nor should they be, and it’s an acquired taste, really. Low frequencies are somewhat milder than you would have with wired versions, and some frequencies on the lower end of the spectrum can be disappointing. If you’re looking to crank up your Hip-Hop or Funk on these headphones, you may have to settle for less than what you bargained for. But on the whole, you can’t fault these headphones. The sound will be crisp and smooth and that’s all you really care for, in the end.

Voice quality will be high, and even though you may have to speak up for your listeners to hear you in a crowded room, you won’t have to crank up the volume to hear them. Microphone pickup is not very sensitive, but these headphones are made for dynamic people, so they obviously work well for people who are on the move, energetic, and not afraid to speak in a regular tone of voice that can drown out traffic and noise, as opposed to whispering in their mics.

Thanks to the fact that controls are on the outside, right on the earpieces, these headphones eliminate the need to fiddle with the phone. As it says on the cardboard box, Flexion Kinetic is compatible with iPad, iPhone and Android. Because they don’t need a cable, these headphones will enable you to leave the phone in your bag while you use a treadmill. The signal is good enough to allow this. You may be able to go as far as 10-15 paces away from the device, and you’d still be able to enjoy a stable connection. They also enable you to switch from music playback to call answer mode effortlessly, with just the push of a button. 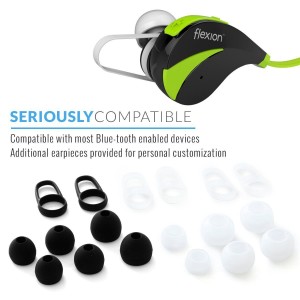 Every Flexion Kinetic Series Wireless Headphone set comes complete with a user manual, a charging cable, and custom earbuds. There are multiple ear insert sizes. Once the headset pairs via Bluetooth, the connection is stable. It doesn’t drop in the middle of a conversation, as you might have seen other headphones do.

The behind-the-neck wire is slightly rigid at first, but once broken in, they are extremely comfortable. They are less likely to become tangled in clothes or to drop out from the ear, as compared to other headphones. One important thing to note is that the headphones will not automatically reconnect to the phone if they’ve been turned off and back on again. As the battery life is generally quite good, though, you may simply leave them on when not in use for short periods of time.

They most certainly are not the best headphones money can buy, but they never claimed to be that, either. For the price, though, Flexion Kinetic Series Wireless Headphone may very well be the perfect headset for people on the move who like to keep their phones out of sight but not miss a beat of their favourite music.

No comments to show.