The Performance MX mouse is Logitech’s top-end home office and business mouse on the market. Accessories include a charging cable, a USB wall charger, Logitech’s proprietary Unifying USB receiver, handbooks, a DVD with common software drivers, and a carry case, though the mouse doesn’t fit particularly well into the case. We tested this mouse because, despite being marketed at home and office users, it has some fairly impressive specs and is a great alternative for those who don’t like the insane number of LEDs used on Razer mice, for instance. 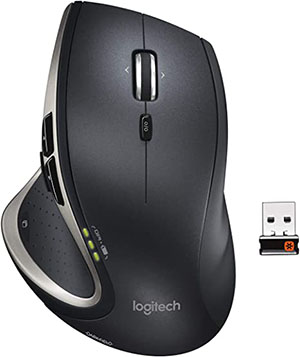 The aesthetics of the Performance MX mouse are great. It sports a sleek black paint job, highlighted by silver accents that run down the ridge right above the thumb rest. It feels solidly constructed and clearly Logitech thought a lot about the ergonomics in designing this mouse. We were especially fond of the rubberized surface underneath the thumb rest. While the rest of the mouse was smooth, this little additionally grippy area made hours of mousing incredibly comfortable.

Its form hasn’t changed that much compared to its predecessor, but Logitech did make the mouse wider and moved a few buttons around. It is extremely comfortable to hold, even for long periods of time. The top of the mouse is fairly straight forward. It has two buttons with a scroll wheel between them. Immediately behind the scroll wheel is a toggle switch that will take you from smooth infinite scrolling to click-based scrolling.

We were very impressed with the scrolling of the mouse in both modes. The weighted wheel spins very freely, allowing you to get through huge documents easily (maybe not strictly a gaming feature, but still useful) and the click-based mode was excellent for precision. During gaming, we found ourselves using the click mode most frequently.

The sides of the scroll wheel also are buttons as is the wheel itself, so nudging the wheel to the right or left activates them smoothly and easily. This is another useful feature, allowing you to bind DPI changes, weapon changes or loadout changes and have them available at the press of your finger.

The top of the mouse also features three LEDs which are used for two functions: showing the battery life and indicating which DPI mode you’re using. When you first use the mouse, the LEDs light up and show you how much battery is remaining, with the last one turning red when the battery is critical. In gaming mode, these LEDs are used to indicate changes in DPI — the top two light up for the “high” setting and the bottom two light up for the “low setting.”

The mouse charges via standard micro-USB cables and the port for charging it is on the front. Logitech clearly learned a few lessons here from other designs and ditched the complicated charging docks. When the MX runs low on battery you can simply connect the charging cable and keep working, instead of interrupting whatever you’re doing to stick it on a cradle.

The side of the mouse sports the classic backward and forward thumb buttons as well as a third button right below them labelled “zoom.” We never used this for the zoom functionality, but instead bound it to our DPI changes. The thumbrest itself is also a button, giving you tons of configuration options.

The MX boasts Logitech’s “Darkfield” technology which is really incredible. The mouse can be used on literally any surface, including glass. New feet underneath the mouse support it and give it a silky-smooth gliding feeling across any surface.

The mouse has a maximum of 2,500 DPI, which is low by today’s gaming standards, but more than enough for most gamers anyway. Let’s be honest, who uses 5,000 DPI on a regular basis? We found the DPI settings to be more than sufficient, though we might have liked it better if Logitech included three modes for DPI, not just two.

Logitech finally graced us with a non-removable rechargeable battery in the MX. Though it is smaller than some of their previous batteries (and therefore requires more recharging), it is sufficient for at least a week’s worth of serious use. When the mouse needs to be charged, you can attach the USB cable and continue to work.

One thing we didn’t like was the inability to switch between button profiles on the fly. Though the software supports multiple profiles, it doesn’t let you change them unless you do it through the software. A minor complaint.

We DID really like how the software notifies you of a low battery though. If the battery gets extremely low, an opaque window will pop up on the screen and tell you to connect the charging cable. Considering how we always forget to charge the mouse, this is a nice little touch. You plug in the USB cable and you’re off to the races again.

The Performance MX mouse is really fantastic, especially for people that mix work and gaming together. The mouse functions admirably in both capacities, giving you the ability to effortlessly scroll through long documents one day and snipe your enemy in the head the next.

It has sound design, construction, and is loaded with features. The Darkfield sensor is absolutely amazing, especially when you first use the mouse on a glass surface.