Merkur has long been a trusted name brand providing quality razors that allow for a close and comfortable shave. The Merkur Double-Edge Razor SV-05X has a chrome finish, is very sturdy, and comes with a platinum coated double edge blade for the closest of shaves.

Merkur contends that the SV-05X is a comfortable fit for all guys but specifically designed for those with larger hands. As someone with large hands, I can’t speak to comfort for those with smaller hands but I have heard from some guys that they felt it was difficult to handle. 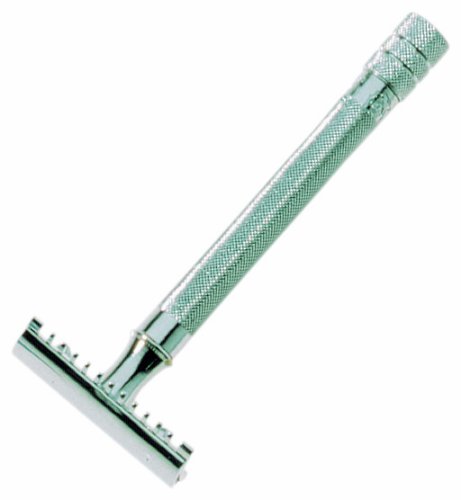 One of the factors that make a safety razor produce well is weight. The Merkur Double-Edge Razor SV-05X has a nice solid feel to it. The weight of the razor makes it easy to let the razor do with work and alleviating any unnecessary pressure which can lead to nicks, cuts, and skin irritation.

One of the great things about the Merkur Double-Edge Razor SV-05X is the flexible options. You can get the SV-05X long, long with a guard, or slim with the guard. I prefer long without a guard but slim with a guard might be a great option for those with smaller hands.

Having a guard is a great option for those new to using a safety razor. However, with experience and practice I feel a guard is more cosmetic than anything. Also, I’ve heard guys say having a guard can reduce the quality of shave.

Out of all the common complaints I’ve heard about the Merkur Double-Edge Razor SV-05X, the majority turn out to be operator error. If you don’t take proper care of any product you will not get the performance you expect.

Safety razors need to be taken care of. They are not disposables and shouldn’t be treated as such. One of the guys I heard complain about the overall quality of the razor. The complaint was that after dropping the razor in the shower the top end screw fell out and appeared corroded.

If you leave your razor in a moist area or have it exposed to moisture for prolonged periods of time, you are going to have issues. Water contains all kinds of harsh metals that can eat away at a razor. Over time it will of course corrode and eventually fall apart, especially if you leave it in the shower and then drop it on a hard tiled surface!

Cleaning and storing the Merkur Double-Edge Razor SV-05X is really simple. After each shave, be sure to clean the razor of any hair and cream. Be sure to thoroughly dry the razor and store it in an open but dry area. A medicine cabinet or even getting a razor and brush stand works perfect.

One of the main reasons guys end up using a safety razor such as the Merkur Double-Edge Razor SV-05X is not only because the quality of shave but also the savings. Using a disposable can leave your skin irritated and having to constantly buy new razors can rack up real quick, especially if you shave every day.

Whether you’re experienced with wet shaving or new to using a safety razor, the Merkur Double-Edge Razor SV-05X is a great choice. The price is awesome and the overall savings in the long run can’t be beat. Yes you have to replace blades, but buying blades are extremely cheap. I’ve seen deals for a 1000 blades for like $15! That will pretty much last you 4 to 5 years depending on how often you shave.

Currently, you can purchase the Merkur Double-Edge Razor SV-05X from Amazon through the following link.

Do you own a Merkur Double-Edge Razor SV-05X?  If so, share your experience  in the comment section below and help other guys make a more informed buying decision.