Morphy Richards is one of the best companies in the UK who manufactures domestic products for nearly 70 years. About 90% of UK homes have the product of Morphy Richards as it meets the budget of the people. Now to the needs and taste of the people it have come up with a slow cooker which is this model who loves to eat tender food like beef, chicken and stew and in a healthy way. This cooker has 3 in cooking functions and choice to slow cook in variable timing. The following is the review of Morphy Richards 48784 Slow Cooker model that brings a better understanding about the product.

Morphy Richards 48784 Flavour Savour Digital Slow Cooker is designed with stainless steel for better maintenance and durability and also easy to clean. It has narrow bottom so that the food has less chance of burning and a wide bowl top to give room for the food to cook well and make it tender. It is easy to stir the food for better consistency.

The base of the cooker has a digital panel which gives you easy access to the controls. It has a toughened glass lid which is transparent can withstand the maximum heat. The stainless steel made handle with a plastic grip allows you to carry the cooker without burning your fingers.

This Morphy Richards 48784 4.5 Litre slow cooker has a pan which allows to heat up to 200° where you can cook the food to give a good taste and moreover it is sealed with in the thickened glass so that the aroma does not go out of the cooker. We can also brown the meat before cooking using the hot base which is included in the cooker.

Apart from this it has a 3 in 1 functionality which is fast stew for faster cooking which can be cooked in one and a half hours, seal to give more taste and aroma to the food and slow cooking to give tenderness for meat such as beef, pork or mutton which has option to cook from four hours to ten hours.

This cooker has different cooking settings such as low, medium, high for slow cooking and also a 2 x 15 minute program for browning the food according to the taste. Its base is made up with a Non slip feet so that the cooker is fixed in a proper place for better handling.

Morphy Richards 48784 Flavour Savour Stainless Steel Slow Cooker is good and enough for a family of 4 to 6 members which holds 4.5 litre of food. The cooker weighs about 3000 grams and 360 mm in width 265 mm in height and 295 mm in length. It is electrical product which consumes 800 watts of power which is quite satisfactory rather than using an induction stove or an oven for a period of 4 to 10 hours. 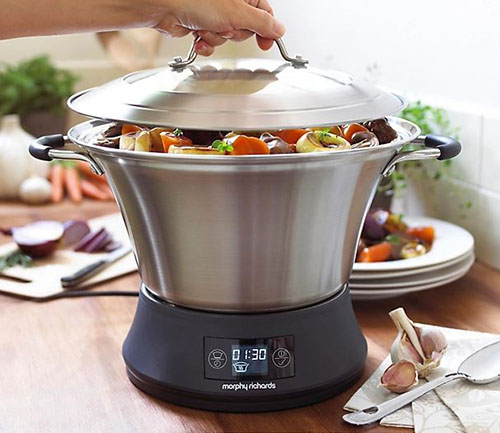 The manufacturer not only offers Morphy Richards 48784 Flavour Savour 800 Watts Slow Cooker in a package with Toughened glass lid, Instruction booklet, it also gives am guarantee for 2 long years.