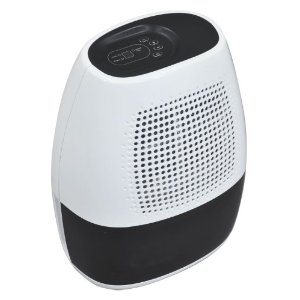 The Prem-I-Air Xtreem Compact Dehumidifier has a large capacity with an extraction rate of up to 10 litres in a 24 hour period. It is ideal for homes and other spaces that need moisture removed from the air and though compact can work effectively for large areas while staying in one position. It features electronic controls and has variable humidity control as well as an option for continuous drainage so you don’t have to worry about emptying the tank.

The unit is fairly quiet and removes a lot of water from the air.

One owner mentioned that their dehumidifier seems to struggle at times but still removes humidity from the air.

An owner of the product loves the unit and considers it to be the best dehumidifier because it solved a problem that they had for quite a long time. They live in a small flat which steamed up whenever it rained or every day when they cooked. Sometimes there was so much condensation that there started to be a lot of mould. After purchasing this unit they ran it for 24 hours and it removed all the condensation and now they have no more mould.

They run it every day now and only need to empty the tank twice per day. Since it rains almost every day they love the fact that they don’t have to suffer from all the condensation and mould growth that was once their norm. They would definitely recommend this product to anyone who is seeking to purchase a dehumidifier in their dehumidifier reviews.

Another person that wrote one of the dehumidifier reviews mentioned that the unit was remarkable from the very first use and has done a great job of reducing the humidity in their home. There is no longer any condensation on their windows after waking up in the morning and their clothes are no longer damp and suffering from mould. She is glad she no longer has to wipe windowsills in the mornings giving her one less thing to do before she starts her day. There is no longer that damp smell on the clothes and bedding so it is all great.

She stated that there was so much moisture in the house that they had to empty it up to four times but now they don’t have to empty it that much. She states that it is very quiet and she can easily sleep throughout the night with it on.  She initially had it running non-stop for a couple days but now she can let it run every other day. She stated that the price was right as she didn’t want to spend too much but wanted a good quality product and this is exactly what she got and so it is the best dehumidifier as far as she is concerned.

Another person purchased it for using in a log cabin. The cabin is used for dog grooming and so he needed something to make its working atmosphere more comfortable to work in and less humid. This did the trick and as also improved his productivity as he now takes a shorter time to dry off the dogs. He highly recommends it as a great product in his dehumidifier reviews and would not exchange it for another.

Another person who wrote one of the dehumidifier reviews states that the unit is great. After using it for a month they can safely say that it does a good job at removing humidity from the air. She recommends it even though her water tank doesn’t seem to hold the stated 10 litres per day. She also stated that she thinks that the price is well worth it on all levels. Though she believes it doesn’t seem to hold the stated capacity the continuous drainage option is very appealing and she will try to put that together in the future.

This is a great unit. It is lightweight and gets the job done and has a number of best dehumidifier reviews to back it up.

Best Dehumidifier for RV Use