In a world that isn’t short on gaming headsets, Sades sets out to lay down a marker in the affordable range. Will the quality prove as attractive as the pricing?

The first thing I’ll say straight off the bat is that this headset doesn’t make a terrific first impression.

You’ll notice that it’s predominately made from plastic, and looks a little cheap. However, happily, it has to be said that on this occasion, first impressions aren’t always correct.

Yes, you’ll find sturdier, more well-made headsets out there than the Sades SA-708 range, but not at this price.

Based on my first impression, I really wasn’t expecting much as far as build quality goes, but I was happy to be proven wrong.

It turns out that it’s actually lightweight and surprisingly sturdy. 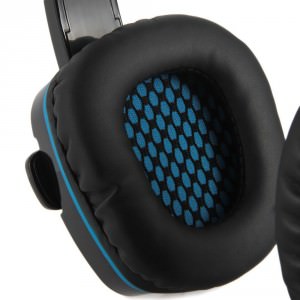 The only issue here is that it can become a little uncomfortable after an extended period of wear, but this can be said for a lot of headsets.

You get around 1.2 metres of cable that connects the headset to your gaming device, which is a decent enough length. The cord also comes with an on-cable volume control which is a nice feature.

Personally speaking, I think the black and blue option makes more sense. The white plastic looks a little bit cheaper and will undoubtedly get dirty a lot quicker. It really does come down to personal preference though. 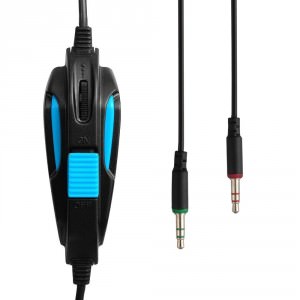 This is the department where a lot of budget-priced headsets tend to come up short.

They can look great, have a multitude of colour options and so on, but if the sound quality is poor, then they simply aren’t worth the money, regardless of how cheap they may be.

I’m pleased to say that the sound quality of the Sades SA-708’s is more than acceptable. Providing a very clean and crisp stereo sound, the sound quality certainly flies in the face of the modest price tag that this headset carries.

The closed-ear style allows you to adjust the volume to a level that suits you, without worrying about sound leeching out to disturb anyone who may be situated close-by, and they also do a good job of keeping outside distractions away, enveloping you completely in the sound of the game you’re playing.

Another positive aspect of the sound quality of this headset is the pronounced bass effect.

Now, ordinarily I wouldn’t be appreciative of this in a regular set of headphones, but for agaming headset, it works remarkably well. A common complaint of a lot of gaming headsets is that the sound can be a bit too “tinny”, which may become annoying after a while. Not the case with the Sades SA-708’s.

I consider sound quality to be one of the two most important factors in a gaming headset, and this particular model passes the first test with flying colours.

This is the other most important factor when it comes to a gaming headset: The microphone.

Being able to communicate with people online is a vital component of the online gaming experience, and a quality microphone is paramount in that respect. 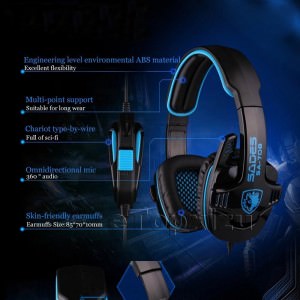 I’ve heard some people say that they think the microphone is rather far away from them and that they would have liked the option of adjustable positioning, and that is certainly a valid point, but the quality of the microphone itself seems to be of a good standard.

When communicating with team mates in an online gaming experience, the microphone certainly does the job and then some. It doesn’t appear to pick up external sound from the surrounding environment, and by most accounts, any voice commands are heard loud and clear.

As a plus point, I’ve also heard some people mention that the microphone works well in non-gaming situations as well, such as for home-schooling and Skype calls.

Overall, the microphone works well, and once again we see a level of quality that far exceeds the expectation of a headset of this price.

Gaming headsets come in various styles with various features and at different prices.

You can easily pay more than five times the price of a set of Sades SA-708’s for a high-quality gaming headset in today’s market.

However, if you’re operating on a budget, then I don’t think you can go far wrong with this headset.

Sure, it doesn’t feature a lot of the bells and whistles that more expensive headsets may offer, but it does the job, and does it surprisingly well, considering the modest price tag.

As I mentioned in my review, I wasn’t initially impressed with the look of the headset. It does look a tad on the cheap side with a whole lot of plastic, but it is surprisingly sturdy and well-made when you take a closer look.

It’s worth bearing in mind that you are paying a relatively low amount of money for it, and in some aspects you will get what you pay for.

When it comes to both sound and microphone quality though, this headset punches far above its weight.

It really comes down to your own personal preference.

If you want something that looks expensive, then you may want to think twice about this headset, but if you’re looking for quality when it comes to sound and the microphone, but don’t want to pay a fortune, then you could certainly do a lot worse.