If you’re an outdoor enthusiast, work in the military or law enforcement, or need a robust, rugged torch for work, then you’ll find a well-made flashlight a useful gadget to carry around with you.

The main pricing difference is down to the power of the light source, normally a cluster of LEDs (Light Emitting Diodes) or xenon bulb, measured in lumen (normally in the range of 100-1000 lumen). Additionally, the construction is important, with premium price models constructed using an aluminium body with an anodized finish and waterproof switch gear.

I only cover tactical flashlights on this site, so this means that the torches are built to withstand a rough treatment in a tough environment. Many models have a range of mounts, from a simple clip to fit your pocket to a weapon mount that locks into place on standard size rails on a weapon.

There are a number of major manufacturers, each with their own leading brands such as UltraFire, UTG and FordEx. These each produce dozens of different models with a wide range of features that can be confusing – so I’ve written the best tactical flashlight reviews to help you choose the right one for you.

Since you’re visiting my site, you’re probably researching types of flashlight and are planning on buying a new unit or searching for the best price. To help you, I’ve put together my unique interactive chart of tactical flashlights below. I’ve also written reviews and analysis of the main flashlights on the market to help you decide if a particular model is right for your work or activity. 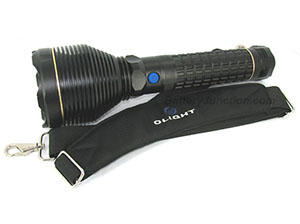 To call the Olight SR90 Intimidator LED Flashlight a flashlight is almost a crime, it is far more than simply a flashlight. It is an extremely powerful light source that can be used in a number of applications from camping, fishing, and hunting to search and rescue, military, and tactical.

The Olight SR90 Intimidator LED Flashlight is comparable to just about any HID (High Intensity Discharge) light on the market. It is also well built and very durable. The lens is shatter and scratch resistant and the exterior has a corrosion resistant anodized finish. 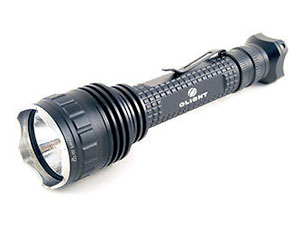 The Olight Triton M30 Flashlight is a small flashlight that puts out an impressive 700 lumens. It was designed with tactical uses in mind and is also great for search and rescue operations.

The Triton M30 is a very durable flashlight built with anodized aluminum and a scratch resistant lens. It’s great for outdoor use weather you are hunting, fishing, camping, etc. It can be dropped, rained on, and otherwise abused and it will keep working.

Since quality flashlight prices are over $25 you can get it shipped right to your front door for free with Amazon’s super saver shipping program. This will save you money and also a trip to the store. 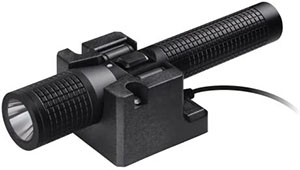 The Inova T4-WB 175 Lumen Rechargeable LED Flashlight was designed with professionals in mind. Military, police, firefighters and other professionals rely on their flashlights to keep them safe so they need a product that gets the job done and is durable and reliable.

The Inova T4-WB 175 provides two hours of burn time and uses a power regulated circuit to produce a beam with uniform brightness for the duration of the battery life. The light will not get dim as the batteries die.

The Inova T4-WB 175 is made from aircraft grade aluminum and is anodized for corrosion resistance. This light is bright and produces 175 lumens and recharges in a fraction of the time that many comparable only the flashlights take. 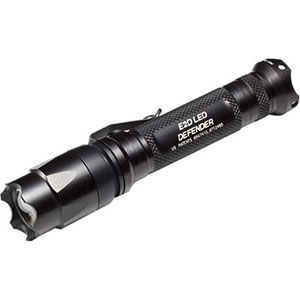 The SureFire E2D LED Defender Dual-Output LED Flashlight is a rugged light able to put out a 200 lumen beam of light on high power. For extended battery life it can be switched to low power with a couple of clicks of the button while still providing ample light for finding your way around in dark spaces.

The 200 lumen beam can temporarily blind a potential attacker and the SureFire E2D also has a crenellated Strike Bezel and scalloped tail cap that allow you to use it as a self defense weapon. The SureFire E2D is virtually indestructible and is also comfortable and easy to use.

Since quality flashlight prices are over $25 you can get it shipped right to your front door for free with Amazon’s super saver shipping program. This will save you money and also a trip to the store. 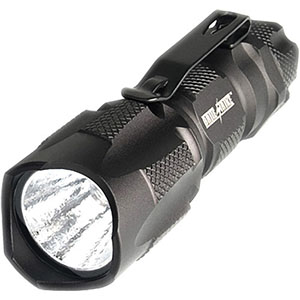 The Brite Strike BDRC-HLS Tactical Blue Dot Series LED Flashlight was designed by two veteran police officers with the intention of creating a high-quality flashlight that was easy to use especially in stressful situations.

The Brite Strike BDRC-HLS is also designed to be very durable and is both shockproof and waterproof. It is made from high-grade, aerospace aluminum and has a black anodized finish for corrosion resistance.

It has a compact design that measures approximately 5 inches in length and weighs under 5 ounces and yet it can produce up to 220 lumens.

In addition to producing a bright, blinding light that can stun and disorient an assailant, the front and rear barrels have strike crowns to increase impact when using as a striking weapon or to manipulate pressure points to subdue a suspect.

Features of a Tactical Flashlight

Most flashlights have similar main features – their quality and power are the way to differentiate (and better quality, more power normally means a higher price!). At the business-end of the torch, there are four main construction elements to look for:

This is the (normally metal) surrounding to the lens at the front of the torch. A bezel can often be unscrewed to clean the lens or to replace the lens with a lens in a special color (e.g. red for night-time work)

The reflector is the shiny metal or plastic internal surface that helps focus and direct the light out through the lens. A reflector is essential to make sure that none of the light source is wasted.

The glass (or plastic) lens at the front of the torch focusses the light to the pattern for this model. Some flashlights allow you to focus the beam manually (from a narrow beam to a wide floodlight).

The electrical component that generates the light. Read the section below for more information about light color, types of light source and their advantages.

Alternatives to an LED include halogen or xenon light sources: both provide bright, pure and powerful illumination (and are used in some high-end vehicles). Comparing these to LEDs and the main difference is that LEDs don’t use a heated filament and a glass bulb. This makes an impact and shock resistant than glass-based units, making this important for tactical or other torches that will potentially take a battering in your sport or profession. LEDs are robust, making them a great choice for tactical flashlights (which often have to take knocks or cope with rough handling).

Lifespan of a bulb

We’ve covered some of the differences between light sources, but from an economic point of view, lifespan is key. Most LEDs have a lifespan of 50,000 hours or more – with some advanced (and expensive) units claiming a lifespan in tens or hundreds of years.

This extended lifetime of an LED source compared to alternatives means that it’s likely you need not to change the light source in your flashlight. This means no more spare bulbs or searching for replacement parts.

Efficiency of a light source

If you look at the efficiency of a light source (comparing its light output to its energy consumption), you’ll see that LED devices are some of the efficient devices available. The side benefit is that the light output doesn’t change with variations of input power – which means you’ll get bright, near-constant illumination while on long night shifts without running the battery down.

This is measured in Kelvin with a higher Kelvin value of a light source describing a whiter light (that the moves towards a bluer the light). This is not a measure of brightness and typical values for the Kelvin scale are:

If a light source is yellowish, it’s on the warm side, whereas blusih light is on the cool side.

For a flashlight, we’d suggest between 5000 to 7000 K as a good range to provide illumination in the natural color of objects. 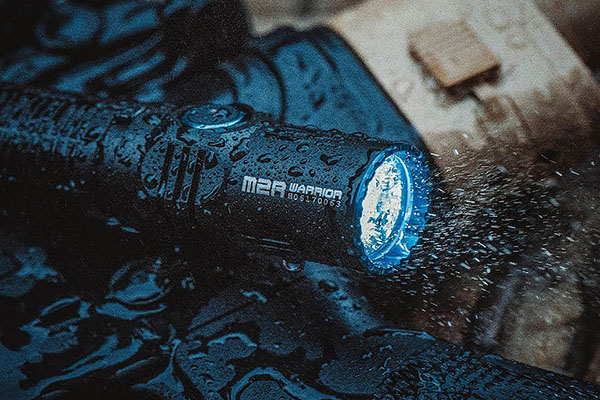 Who Benefits From A Tactical Flashlight?

A top-quality flashlight is not cheap, so make sure that you are spending your money wisely. If you do any of these activities or jobs, you’ll really benefit from a professional-grade flashlight.

You might keep a small torch by your bedside table – the sort you can buy at any hardware store – they’re incredibly convenient, but for specialist tasks you should look for a high-performance or tactical flashlight.

Which is the Best: Top 5 Tips to Choose the Best Flashlight

One of the key characteristics of any flashlight is the amount of light output by different light sources – and how efficiently the light travels through the optics of the torch. These two factors are described using the ‘luminous flux’ of a flashlight, which is measured in lumen, a measure of the power of light. The partner measure is the luminous intensity, which is measured in candela, a measure of the intensity of the light source.

The relationship between lumen and candela depends on a number of factors including the angle of the beam of light. For example, if you focus the light from your torch into a tighter beam, it has a reduced beam angle, so the luminous intensity (brightness) will increase without increasing the amount of light (flux or power).

Flashlight manufacturers often specify the power of torches in lumen but rarely give the candela intensity since (as I mentioned above), the intensity depends on the beam, which depends on the design of the optics and reflector within the flashlight.

Most tactical flashlights have a range of settings that provide multiple brightness modes (as well as special features such as strobe and SOS beacon). When choosing a torch, it’s worth remembering a few key features about the brightness levels of your torch:

A feature of your tactical flashlight is the quality of the light. LED light sources produce a very uniform light in a narrow color band; in comparison, incandescent light bulbs produce various quality of light distribution and across a wider spectrum (often much warmer light than an LED or halogen light source).

Poor quality of light output from a flashlight is often down to the output of an incandescent bulb or its filament. The intensity of the beam depends on a narrow angle of the beam, which also relies on the reflector – which also extends the reach or throw of the beam.

What is a Tactical Flashlight?

A tactical light is a flashlight that has been constructed for a specific purpose. This type of light can be hand-held or is designed to fit on and be used with a weapon or firearm to help low-light identification of targets. This allows a marksman to both illuminate and aim at the target.

In addition to being used with a weapon, tactical lights also work as a method of non-lethal force, used to temporarily blind and disorient targets. Most models include a range of operating modes (typically 3 or 5 modes) that includes both a steady beam of light and a highly disorientating strobe flashing light.

The light source is normally LED, which have high intensity white light (although colored filters and infra-red light modes are available on some models). Some models (such as the UTG Defender) use a xenon bulb – which has some disadvantages compared to an LED (it runs hotter, uses more power but has a very bright, white light).

I highly recommend Fenix store since all of their products are made to last for years. I always do business with them and get awesome military discounts on every purchase.