With so many constant demands from your job, your family, your friends and even your pets, it’s no wonder that you have trouble making it through the day alert and focused.

VitaZen, the manufacturer of a new blend of natural ingredients called CogniZen, claims its product supports healthy brain function and increases focus and memory retention for people who are frequently tired and mentally sluggish.

VitaZen promotes CogniZen as a synergistic formula containing high-quality herbs and supplements that are specifically designed to target areas of the brain. The main ingredients include choline bitartrate, green tea extract, and ginkgo biloba extract.

These ingredients are often used in other all-natural products that manufacturers claim will boost memory and mental alertness. However, CogniZen stands out by featuring high amounts of choline and other less common ingredients in its formula.

Because of the hype and demand for products that are advertised to increase brain function and power, I researched the ingredients found in CogniZen to determine if it lives up to its manufacturer’s promises. 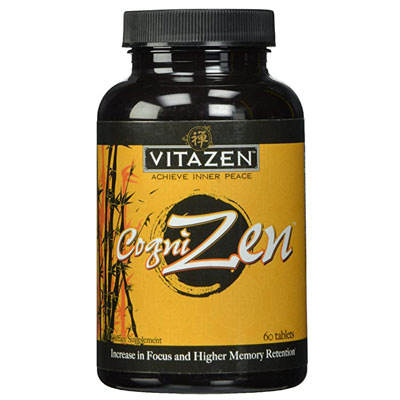 The primary ingredient in CogniZen is 200 mg of choline bitartrate. WebMD describes choline as similar to B vitamins. Choline is used for many different health benefits, including the treatment of liver disease, chronic hepatitis and cirrhosis.

In addition, athletes frequently use it to enhance bodybuilding results and reduce fatigue experienced during endurance sports. Choline appears to play a role in the nervous system as some people use it to treat depression, memory loss and certain types of brain disorders.

The U.S. National Library of Medicine National Institutes of Health reports choline is important for healthy brain development but only during pregnancy. However, a study by the American Journal of Clinical Nutrition [3] also found that high amounts of dietary choline can lead to increased cognitive performance.

Choline is available in many foods, but CogniZen provides 200 mg per serving, making it a quick and easy way to increase intake for people who think they may get a boost from the ingredient.

A 150 mg green tea extract, which is produced from the Camellia Sinensis plant, is the next major ingredient in CogniZen. Many people prepare green tea extract as a hot or cold beverage. Some of green tea’s uses include stimulating weight loss, treating stomach disorders and vomiting, and preventing certain types of cancers.

In recent years, one of green tea extract’s most popular uses is for the improvement of mental alertness and function. Because green tea contains between 2% and 4% caffeine, it is proven to increase cognitive function, according to WebMD.

Virtually all products that contain caffeine, such as coffee, tea and sodas, can temporarily boost alertness and focus. The National Institute of Health also backs up this statement by affirming there is scientific evidence that the caffeine content in green tea improves mental abilities and function.

If you decide to use CogniZen, it’s important to use moderate doses until you know how you react to green tea extract. The high caffeine content in green tea extract and in CogniZen can cause people who are sensitive to the chemical to experience anxiety, heart palpitations and nausea. 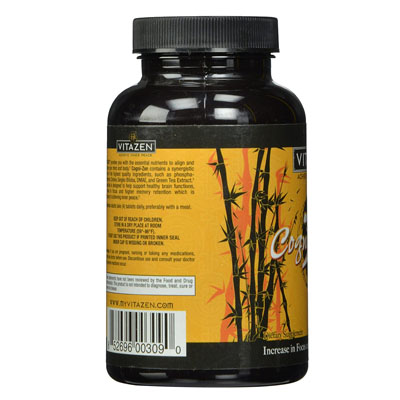 Ginkgo biloba is one of the oldest tree species on the planet and is the third major ingredient in CogniZen in a 100 mg formula. Throughout history, cultures have used ginkgo biloba to treat a wide variety of medical conditions.

Recently, manufacturers of health products like CogniZen have added ginkgo biloba to their health products based on claims that chemicals in the plant boost memory and increase alertness.

The University of Maryland Medical Center confirmed the flavonoids and terpenoids in ginkgo biloba increase blood flow and circulation to the brain. Because of those effects, doctors and hospitals throughout Europe often give ginkgo biloba to patients who suffer from dementia and Alzheimer’s disease.

By improving blood flow in the brain, ginkgo biloba is also linked to decreased feelings of depression and reduced anxiety. In addition, the University of Maryland Medical Center says some studies show ginkgo biloba improves memory in people without any mental disorders or dementia while other studies show little to no benefits.

If you’re looking for a supplement to boost your mental alertness and brain function, scientific evidence supports the effectiveness of the ingredients found in CogniZen.

All three of the primary ingredients are scientifically proven to boost brain function in some way, whether by boosting blood flow or by providing essential nutrients.

However, not everyone reacts the same way to herbal supplements, especially ones that are promoted to positively affect brain function and alertness. It’s important that you try CogniZen with caution and don’t take too much at once or on an empty stomach as some of the ingredients can cause adverse reactions in certain people.

11 Best Skin Whitening Pills You Should Not...

NuBest Plus Review: Is It What Your Skin...

Clenbutrol Review – How it works