For me, this Zojirushi NS ZCC10 5.5 cup rice cooker is really the ultimate rice cooker! Having received top ratings from Cook’s Illustrated, Consumer Reports, this is the fuzzy logic rice cooker that many experts picked for its best performance and programmability after testing out many rice cookers. You just can’t go wrong buying this rice cooker, but wait till I explain its great points.

What I truly love about this rice cooker is that you can cook any type of rice in it and it will come out right each and every time. I tried white rice, brown rice, black rice, yellow rice and even sushi rice, this rice cooker automatically adjusts for cooking different kinds of rice and even stores your texture preference! Yes, you can set the rice cooker to cook softer or harder rice as you like. 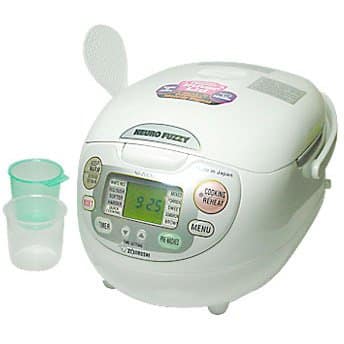 If you’re not a fan of brown rice because of the texture and taste, try the brown rice from this rice cooker! It is much nicer and tastes almost like white rice, only slightly nuttier and not at all hard or crunchy. I have tried brown rice from many rice cookers, but never once acquired the taste for it. This is the best rice cooker for brown rice, I must say. And that’s not all, you can also cook steel cut oats in this rice cooker using the porridge setting, and add dried raisins or berries in it for a perfect breakfast.

This is really a smart and powerful rice cooker. Even though sometimes I messed up the measurements for the water, but still the cooked rice comes out perfectly each time. This can be a lifesaver especially when you’re expecting guests. However, compared to other ordinary rice cookers, the trade off is a longer cooking time. I hate rushing about trying to plan meals in time so I simply get everything ready long before mealtime and preset the timer.

This rice cooker is pretty easy to use even though it comes with a lot of features. The buttons and the display panel are clearly labeled and intuitive. There’s also a reset button if you made a mistake in the setting, so you can have fun playing around with it before putting it to practical use.

Note that the 5.5-cup capacity for this rice cooker refers to 5.5 cups of raw rice. That’s good enough to serve 3-4 people in the family. This is a pretty standard capacity for a rice cooker but if you are looking for a smaller rice cooker to cook for 1-2 people, you might want to check out this Zojirushi 3 cup size rice cooker.

Easiest to Clean Rice Cooker in the Market

I really like how the Zojirushi rice cooker is easy to clean with a nonstick inner pot and detachable inner lid. Just snap out the lid and you can rinse it under the tap. Be careful with the nonstick coating of the pot and you’ll have a rice cooker that lasts you for years to come. Many reviewers have confirmed this, saying that their Zojirushi has lasted for five, six years and is still going strong.

The Zojirushi rice cooker comes with a spatula and two rice measuring cups (you should use the clear one to measure rice with) but it doesn’t come with a steaming basket, which is rather unusual for a Japanese rice cooker. But not a big deal because I made do with an old steaming basket from another rice cooker whenever I felt like steaming something.

Anyway, Amazon has a very good discount on this Zojirushi 5.5-cup rice cooker. Don’t you just love to get the best deals online?