Today we’re taking a look at a foil shaver from Braun, the Braun Series 3 390cc 4 Foil Electric Shaver. While Philips shavers tend to be the best selling on the market, the Braun series of electric shavers is also very well respected. The Braun Series 7 790cc that we recently took at look at received a glowing review, so we’ve got high hopes for the Braun 390cc. First we’ll take a look at what this shaver has to offer, and then we’ll move on to take a look at what people are saying about it.

The Braun Series 3 390cc is designed to cause minimise skin irritation by cutting long hairs properly, instead of pulling at them like some electric shavers tend to do. Braun have included what they call their Triple Action FreeFloat System. This means that the shaver has three independent blades; two foils and a middle trimmer. The first foil shaves shorter stubble, the middle trimmer captures and cuts longer hairs, and the second foil cuts the rest down as closely as possible. This three step system means that the Braun Series 3 390cc doesn’t tug at the hair, and therefore irritates the skin much less.

Each of these blades can move around independently of the others. This means that the heads on the Braun 390cc have the freedom to adapt to the shape of your face. This causes less friction, and ultimately less skin irritation. 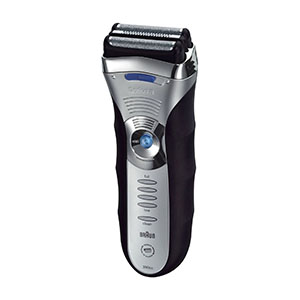 The Braun Series 3 390cc is easy to clean, and can simply be run under a tap to clean. It also has a built-in cleaning system, which Braun call it’s Clean and Renew system. This is a push button cleaning mechanism which cleans, lubricates, dries and then charges the shaver with one button press.

The Braun 390cc also has an LED ‘Show and Tell’ display with the usually battery-life indicator, but uniquely, the display will also advise when it is time to clean the shaver, and even when it requires replacement parts.

The battery takes just 1 hour to get to full charge, and you have 45 minutes of shave time in a single charge. We’ve found in the past that customers really appreciate quick charging times, so we’ll definitely take a look at what people have been saying about the battery life of the 390cc. The quick charging, long battery life, and the inclusion of a soft carry case makes this look like a good package for anyone who travels a lot.

The Braun Series 3 390cc rounds off the package with an ergonomic design for comfortable use, and a two year manufacturers warranty.

The Braun Series 3 390cc has been a popular and well selling product, so there are a lot of customer reviews and opinions available. Having examined them, we can report that over 83% of customers were very happy with this electric shaver. Let’s take a look and see what the good and bad points were.

One of the first things that we noticed about the Braun 390cc shaver was quite a surprise to us, and that is the Clean and Renew system. To be honest, we had set out thinking this was just a gimmick, but actually almost every customer mentioned that it is excellent. In fact, this automatic cleaning system is so well regarded, that even the minority of customers who gave the 390cc a bad review sang it’s praises. By all accounts, the Clean and Renew system leaves the shaver exceptionally clean and fresh smelling every time, and was a much appreciated feature.

Another thing that the majority of reviewers mentioned was that, as advertised, the Braun 390cc doesn’t tug or pull at hairs as much as other shavers. People with sensitive skin particularly appreciated this, and actually, quite a number of customers mentioned that they felt the 390cc gave them a comfortable shaver, and that their skin was indeed far less irritated than they’d experienced with other shavers.

Almost all the positive reviews also mentioned that the closeness of the shave that they experienced with the 390cc was very good. Quite a few people felt that it was the closest shave they’d had from an electric shaver, and something approaching the closeness of a wet shave with a razor blade, if you shave with it every day. As the 390cc is a foil shaver, people also appreciated the fact that the recommended shaving technique is to move the shaver up and down the skin, rather than the more uncomfortable circular motion required of rotary shavers.

“My husband was delighted to get this shaver – as it looks nice, is compact and in a nice case with a docking station for cleaning and recharging the shaver. He’s very happy with the close shave he gets and says it’s great for sensitive skin”

As mentioned, the vast majority of reviews for the 390cc were very positive. The few negative reviews seems to be from the minority of men who had problems with the closeness of the shave. The trend that appeared to emerge from taking in these few negative reviews, was that they tended to be from men whose stubble grows in many different directions. It seems that, unfortunately, the Braun 390cc wasn’t very effective for them (although most of them mentioned that most electric shavers couldn’t cope with the job). So, if you do have stubble which lies in many different directions, you might like to stick with wet shaving, or try out a rotary shaver such as the Philips RQ1180 instead. 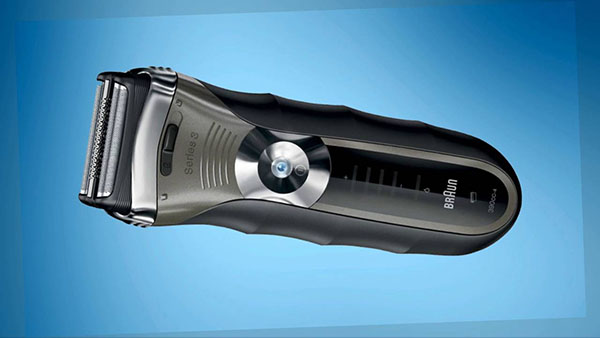 Some minor points that were also mentioned was that the charging/cleaning station was quite big and bulky, although since almost everyone sang the praises of the cleaning feature we don’t think this is too much of a problem, and certainly shouldn’t put you off the 390cc at all!

The Braun Series 3 390cc seems to be a very good shaver, with a lot of people mentioning that they felt that it’s foils were gentle and comfortable on sensitive skin, causing less irritation than other electric shavers. While the automatic cleaning system might sound gimmicky, in practice this is an efficient and effective feature that almost every customer really liked. The only thing keeping this shaver from getting top marks, is that it might not be suitable for the minority of men whose stubble grows out in erratic directions. That said, for the majority of men the Braun 390cc comes well recommended. 4 stars from us!