Today we’re taking a look at the Braun Series 3 380s-4 Wet & Dry Shaver, the bigger brother of the the Braun 340 shaver which we reviewed several months ago are were very impressed with. For the most part, the Braun 380 is identical to the 340 model, but there are some minor differences which we’ll go through later. First off, we’ll recap the major features of the 380 briefly (although do remember to check out our Braun 340s-4 review for a detailed look).

The Braun 380 contains the same Triple action cutting system as the 340 model. There are two foils in the head, which enclose a middle trimmer. These blades cut each hair progressively closer in turn, in order to achieve a close shave.

Each of these cutting blades is also part of Braun’s “freefloat system”, making them independently moving elements. This allows them to adapt to all of the contours of the face, and reduce friction between the shaver and your skin. This helps to minimise skin irritation. Braun claim that the 380s-4 will cause around 30% less irritation in the neck area than you’d experience with rotary shavers. 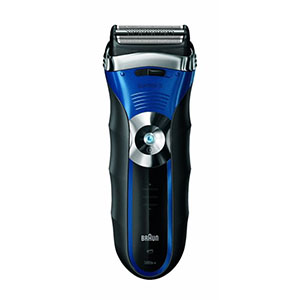 The shaver is fully waterproof and can be used with a foam or gel if desired, and even in the shower. It’s also washable, which means you can simply run it under the tap once you’ve finished to give it a clean. It also has a pop out trimmer for precision jobs such as shaping the sideburns.

The Braun 380 also comes with a quick charging battery, which can be given a full charge in around 60 minutes. The shaver will run for 45 minutes on a full charge, and has a 5 minute quick charge feature; plug it in for just 5 minutes to get enough battery power for a single shave.

The 380 includes a head lock, which you can use to stop the shaver head from moving. The idea is that you can lock the head when you need to be more precise in tricky areas.

Finally, the 380 model also comes with a soft travel pouch in the box, whereas the 340s-4 doesn’t come with any travel case at all.

There is also a minor cosmetic difference the trim surrounding the shaver head and power button on the 380s-4 is silver, compared with the 340’s black trim.

As you can see, the differences are relatively minor and in some cases cosmetic only; although we welcome the addition of a travel pouch with this shaver which we felt was a bit of an oversight in the 340 model.

Whilst this is a relatively new shaver, there are already quite a few customer reviews and remarks available online as it’s been selling very well. Currently over 97% of customers gave the Series 3 380 a positive review of 3 stars or above. The early signs definitely show a high level of satisfaction with this shaver. This isn’t a surprise though since it’s so similar to the Braun 340s-4, which we’ve already reviewed and found to have a very good customer satisfaction rate. So what in particular did people like about the 380?

As we expected, quite a number of men were very pleased with the gentleness of the shaver. Many customers specifically mentioned that it gave them an irritation free shave, and several customers who had previously suffered with irritated skin from shaving found that the Braun 380 caused little or no irritation on their skin. If you do suffer with sensitive skin, you should definitely take a serious look at this shaver.

“Overall it gives a smooth yet really effective shave; I have fairly sensitive skin but I haven’t had any problems so far after using this shaver.”

People were generally very happy with the closeness of the shave that they get from the 380s-4. Usage ranged from men who liked to use it as a quick way to touch up before an important meeting, to men who used it as their primary shaver. All seemed to agree that it gave a decent level of shaving for an electric shaver; even some men with thick stubble commented that it did a good job for them.

In terms of the ergonomics of the 380, this was another area which was mentioned quite a few times. Several customers pointed out that the 380s was light and easy to hold, and handle whilst shaving. It was also pointed out that it is a very quiet shaver, which in these days of iPhones, iPods and tablets makes it a lot easier to listen to some music or watch a movie in the bathroom whilst you’re having your shave.

“Gives superb results (I have quite thick stubble) – a really close shave without drying or irritating the skin.”

As pointed out earlier, negative reviews of the Braun 380 were very thin on the ground. One of the negative comments was that the reviewer felt that the shaver was rather expensive, but that comment is now well out of date (this shaver is currently available for 55% off, which makes it an affordable mid-range shaver). Another negative comment was that you can’t fit the charging station into the travel case, however I think this is a bit of an unfair comment. The battery holds a 45 minute charge, which should be more than enough for most travel purposes. I can’t ever remember seeing a shaver travel case that had room for a charging station too, so although I sympathise that it might be handy, I can’t count that against the shaver! 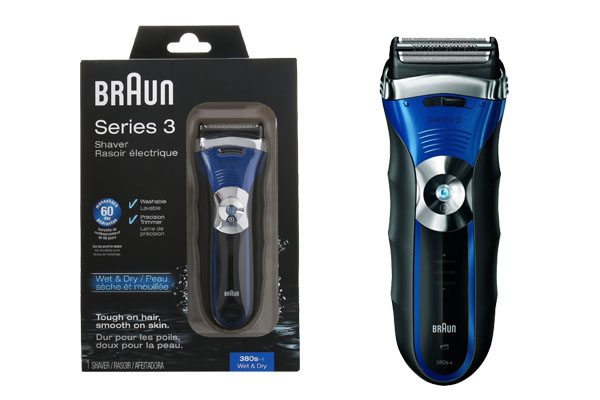 The one downfall that we noticed with this shaver, is that the differences between the 380s and 340s are very minor; the addition of a carry case is very useful, but considering the 380 is around £20 more expensive we don’t think that represents value.

Since the Braun 380s-4 is almost identical to the 340s-4 which we’d already taken a look at, we were pretty much expecting to see similar feedback; indeed the satisfaction rate with this shaver is very high and the men who bought it seem to praise it very highly. We can’t deny that the 380s is a great shaver, but we’d recommend the Braun 340 instead as it does represent better value for money. The 380s-4 loses a mark for being a fair bit more expensive without adding much extra in terms of feature over the cheaper model. 3 stars.