The Braun Series 7-720 is a technologically sound shaving instrument with personalized settings and features that provide a close and comfortable shave. The Braun 720 uses both active lift and opti foil technology allowing blades to cut even closer and making flat lying hair a problem of the past.

Let’s take a closer look at some of the cool features and technology that went into making the Braun Series 7-720 such a solid all around shaver. 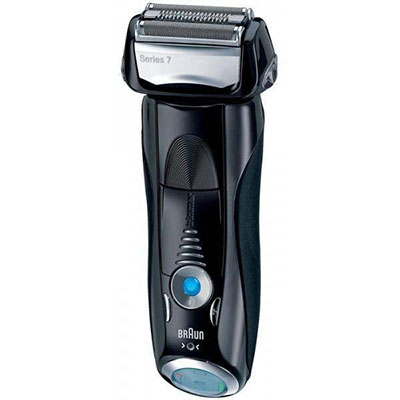 Braun uses “Intelligent Pulsonic Technology” on the 720 which allows for micro vibrations up to 10,000 actions per minute. Why is this important?  Well, razors that use a strong motor or CPM’s means reduced pulling or tugging of skin and hair. I dare say the faster the better, but I’m sure there’s a limit or specified rate of vibration that delivers optimal performance.

Along with being fast, the Braun Series 7-720 provides a quality shave using a contour adaptive head. No matter the angle, the head will adapt to the curves on your face allowing the blades to deliver a close shave without having to go over the same area multiple times. The contour adaptive head also allows for less pressure which will save your skin from irritation.

The extra sensitive setting is great for guys with sensitive skin. The intense mode is a great feature for guys with really thick or coarse hair. This makes the Braun 720 a great pick for just about any skin and hair type.

The Braun Series 7-720 functions as a wet or dry shaver. It is 100% waterproof so you can use it in the shower and it makes for easy clean up. The Braun Series 7-720 does not come with a standalone cleaning station (“Braun Clean and Renew”) like some of the other Series 7 shavers. To clean the Braun 720, simply run under water. There is also a cleaning brush included for a more thorough cleaning.

If you are an international traveler, you’ll love the 720. It comes with a smart plug with worldwide voltage ranging from 100v to 240v. It also comes with a nice travelling pouch making it convenient to take on trips.

Other notable features on the Braun Series 7-720 are the 2 stage LED display and precision trimmer. The LED gives charging and battery status notifications. The trimmer is conveniently located as a pop-up and allows for detailed grooming of sideburns, a mustache and beard.

You can pick up a package deal for the replacement cassette foil and cutter which fits all the series 7 shavers. Changing the foil and cutter is easy. Make sure to follow the directions included in the owner’s manual for your specific shaver. The package deal is available from Amazon through the following link.

My Thoughts on the Braun Series 7-720

As far as functionality, I think the Braun Series 7-720 is a great shaver. The opti foil and active lift technology combined with the contour adaptive head provide a close and comfortable shave. I also really like the design of this model. It has an ergonomic design and looks very sleek.

The only drawback that I can see with the 720 is the fact that it does not come with the clean and renew system. If having an auto charging and cleaning station is important to you then I recommend checking out the Braun Series 7-760 or the 7-790. If that’s not an issue, you can save a few bucks going with the 720.

Now let’s take a look at what other guy’s have to say about their experience and level of satisfaction with the Braun Series 7-720.

What Guy’s are saying about the Braun Series 7-720

The Braun Series 7-720 received an impressive average rating of 4.3 out of a possible 5 star rating from over 140 Amazon customer reviews. Some of the comments made were:

“The shaver works really well giving a close comfortable shave” and, “The shave is better, and to my perception, is pretty damn close to a blade.”

Currently, you can purchase the Braun Series 7-720 from Amazon through the following link and save 9% off of retail and receive free shipping!

Do you own a Braun Series 7-720? If so, please share your thoughts in the comment section below and help other guys make a more informed buying decision.