Finally, a steam machine that promises to perform like a pump espresso maker! Is it too good to be true or have we found perfection? If Cuisineart is to be believed, we have.The Cuisinart EM-100 1000-Watt 15-Bar Espresso Maker is a steam machine that looks a bit like a pump machine if I’m being honest. It is silver throughout and has slightly curved, boxy design that doesn’t excite me either way. For some reason when I look at this espresso maker, the robotic maid from The Jetsons keeps popping into my head. It isn’t small, but it isn’t huge either and weighs less than 20 pounds. It’s going to take up some space on your countertop but you should be okay. 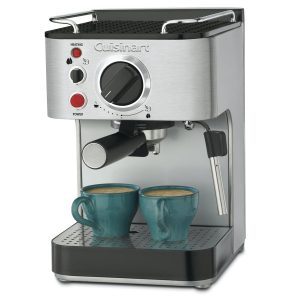 The Cuisinart EM-100 1000-Watt 15-Bar Espresso Maker has some nice features that include:

Here’s the best news you can get: Most people say that the Cuisinart EM-100 1000-Watt 15-Bar Espresso Maker produces unbelievably good tasting espresso and coffee drinks! That’s great and is, after all, why most of us want to buy an espresso maker that we can use at home.

People think it is a well-built machine and it is very easy to use, especially with the three different size coffee filters (2 shot, single shot and pod filter) that come with the EM-100. The design is good from a cleaning standpoint and most people have no problems keeping this espresso maker clean and ready for use.

There aren’t a whole lot of negative reviews about this machine that come as a huge surprise. When you do as much reading about espresso makers as I do, they all start to sound the same and the Cuisinart EM-100 1000-Watt 15-Bar Espresso Maker is no different. Some people report of leaky parts and breakage issues, but those are standard with the territory.

Other issues seem to be around the design of the steam nozzle being too long and the distance between the portafilter and drip tray is too small. Either way, the problem can be solved with using smaller cups (which should be the case for most espresso lovers anyway).

The biggest problem (and it’s a big one!) that I’ve read about is the possibility for TOO much pressure to build up in the machine. This leads to two things: The first is that it becomes almost impossible to remove the portafilter. The second is that unless you’re careful, the pressure can cause a small explosion of hot water and coffee grinds when trying to remove the portafilter. This is a concern and can be dealt with by waiting for the machine’s pressure to die down for 5-10 minutes.

Pricing and How to Make it Yours

For a steam machine that may seem like a lot, but it seems to take care of some of the problems that plague other steam-driven machines. So it might be worth it.

What an Italian Grandmother Would Say

For a steam-driven machine, you could do worse. A lot worse!

I feel like I’ve been a little down on steam-driven espresso machines, just like most people who really get into the “art” of brewing really good espresso. The main complaint that steam machines get is that they can’t build up enough pressure to make a real espresso with great crema. That isn’t a problem with the Cuisinart EM-100 1000-Watt 15-Bar Espresso Maker.
In all honesty though, I’d probably look at some pump machines before I went after this espresso maker.

It’s priced at the same range as some of the cheaper pump-driven machines and if you really love espresso and can take the time to learn a more complicated machine why not? However, if you want something easy and that’s going to make a great cup, then the Cuisinart EM-100 1000-Watt 15-Bar Espresso Maker might be for you!