The G Pen from Grenco Science has been around for some time, but that’s not to say that it’s behind the times. As technology has improved, the vape has gone through many design changes that have improved its quality.

This review is taking a look at a pen we picked up in late 2014. The model we have uses waxes and oil concentrates, but they also sell a version of this pen that is “herb” friendly and features a Snoop Dogg branding partnership.

The G Pen comes in 3 pieces: the atomizer, the mouthpiece, and the battery. These parts are pretty typical to vape pens, and you’ll find them on most designs and models. However, it is the small, unique differences on each pen that gives it its feel, and the G Pen has several of those. 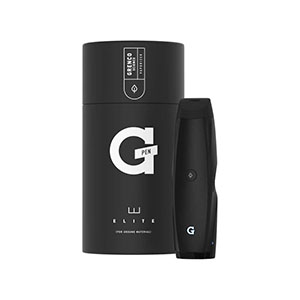 The Atomizer or coil is where the concentrate is loaded. The Atomizer is simple in its design- a chamber with a small wick wrapped with coils near the bottom. The G Pen’s Atomizer is primarily stainless steel, save for the bottom where the wick is. The wick portion of the chamber is made of ceramic, which is a much better material for dealing with heating elements.

Normally Atomizers with a really deep coil, like this one, are a huge turnoff for me because loading it can be a pain. However, loading it was not an issue with this one- it’s not as easy as pens with shallow coils, but loading it has not been an inconvenience.

The pen comes with a small tool that helps to load wax and concentrate into the chamber, which is a huge help because the wick is delicate and easily damaged if you are not being careful.

Like most every pen vaporizer, the coils on this pen will burn out sooner or later (sooner if you use it as much as me), and you’ll know because the pen will stop heating up. I have found that this pen lasts between 4-8 weeks before the coil goes and you need to replace. I buy several coils at once as it helps to lower the cost per coil.

The mouthpiece is pretty standard as far as vape pens go, and that isn’t a bad thing by any means, and I’ve never had any problem with the mouthpiece. One unique part to notice on the mouthpiece is the screen located where you screw it in to the rest of the pen. You won’t be vaping herbs in this pen, so the screen isn’t completely necessary, but it doesn’t subtract from the pen’s performance. I have heard this screen can get clogged over time, which means that you will have to clean the screen with some q-tips and alcohol- just be careful not to get too close to the coil as that could cause damage.

The battery has a similar feel to most pens- soft and pleasant, but the power button on this thing is one of its more unique features. The power button fits nicely into the polished material surrounding it, which gives it has a luxurious feel, especially when you press it! Turning the power on causes the button and the tip of the battery to glow with a faint, elegant blue light. I’m not normally someone who goes for a light-up pen, but the low intensity of this pen is far more appealing than most.

The pen comes with a standard locking feature. You simply click the power button 5 times to lock or unlock it. This is a great feature because you obviously do not want your pen activating while it is in your pocket or purse.

I would easily put the G Pen in the top three of the various vaporizer pens that I’ve tried. It is a quality made product that works well and is quite stylish. It can be difficult sometimes to judge between pens because they all have so many similarities. However, I’ve found that the performance on this one is always great- it always tastes good, it’s never too hot, and it also seems to work very well even with small quantities of wax or concentrate.

What are the health benefits that come with...

Embrace the Vapor: How to Work a Vape...

How to Clean a Vaporizer Pen