Some brands stay with us for ages and ages. You probably remember your mother’s KitchenAid stand mixer, and you might even have one of your own. They used to last and last, made entirely of steel with heavy-duty, long-life motors. All the parts would fit perfectly. There was never any smoking or burning. If you had a motor problem, you could fix it with a bit of machine oil. These things were built to last.

KitchenAid is still in business, and many of their kitchen tools are still quite nice. Not built to last for 50 years, but good enough to have a relatively long life compared to their more disposable counterparts. With the KSB565SM 5-Speed Blender, however, KitchenAid really dropped the ball. It feels like they sold their brand name to some cheap, corner-cutting company so they could move a lot of units quickly and collect some profit. Thankfully, one blender won’t hurt their reputation. But all the same, you should stay away from this product.

Is it really even a KitchenAid? 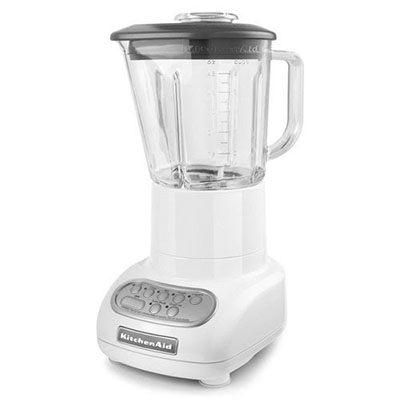 It looks lovely, with a sturdy, curved base in your choice of colors and an attractive, modern design that’s not aggressively futuristic. If you are furnishing a model home, this would be a nice blender to put on the kitchen counter. Just don’t expect to take it home after the sale is closed.

To be fair, all blenders are loud. All vacuum cleaners are loud; all jet engines are loud. And while this doesn’t reach the ear-damaging decibel level of a professional blender, the KitchenAid 5-Speed Blender is still quite loud for having less than one horsepower. This would be forgivable if everything else (or anything else) about this blender were excellent, but that’s not the case.

Too lazy to beat an egg? The blender can do it. Mixing pancake batter? It’ll work. Making a smoothie? You might have to wait a while for that one. One of the main reasons that people buy blenders these days is to create frozen drinks. Frozen margaritas, frozen daiquiris, slushies and ice cream drinks for the kids, and most popular of all, smoothies. These magical fruit-yogurt-protein-powder concoctions are breakfast for a lot of people, but to get a really good texture, you need ice.

The KitchenAid 5-Speed Blender has an ice-crush function, but it doesn’t crush ice. That’s not true for every unit. If you order it, yours might work. But be prepared if it doesn’t. Here are some ideas that might make it easier on your blender: use pre-crushed ice from your refrigerator ice dispenser, blend only a little a time without any other ingredients, pulse very slowly until the big pieces are broken up.

I don’t think you should have to coddle your blender like this. If you have an “ice-crush” function, it ought to crush ice, no questions asked. And it’s true that some units do.

It was a really great idea making the pitcher oblong in order to have better mixing and easier pouring. It’s a shame that this design also leads to liquids exploding out of the top with ease. In addition, there’s a gap where the glass pitcher connects with the plastic base, so when stuff spills over (as it will – often) it’s going to get right into that gap and possible into your motor assembly.

But the real design fail on the KitchenAid 5-Speed was making base out of thin, cheap plastic. It’s not a matter of if it’ll break, it’s a matter of when. The pitcher is heavy glass, a wonderful pitcher, sturdy and capable of handling a lot of force, but the base just isn’t. Since the pitcher is so inclined to leaking due to its shape, you have to hold the lid on with considerable force when starting it, but if you press too hard, you’ll break the base. You might also break it while attaching or detaching it from the motor, or by knocking against something while you’re rinsing the pitcher out. There are so many ways to break this base that you’ll just have to experiment to find your favorite.

Yet another design fail has to do with the gasket around the blades. Blades are sharp metal fins that spin continuously and will wear away any material that they touch. Rubber is durable, flexible material that is nonetheless quite susceptible to scratches and abrasions from metal. So when you have blades that actually rub against the rubber gasket that seals the bottom from the motor, you have a problem. Specifically, you have a leaky base.

And finally, the coupling between the blades and the motor is not nearly heavy-duty enough to last very long. The plastic prongs can get weakened and melted by the motor and torn off completely. Then it’s a new coupling for you!

We are not alone…

There have been dozens of complaints about this blender. It’s only received 3.5 out of 5 stars around the Internet. The general attitude is this: “Why, KitchenAid? We trusted you, and you’ve let us down!” In fact, if you search for “KitchenAid blender” in Google shopping, the most popular result is a replacement coupling!

But if you really want it anyway…

Maybe you have a $100 coupon and you’d like to get this blender for $5. I’d agree that you’d get your money’s worth, and maybe more. If you’re set on having a KitchenAid blender, most of them do have similar problems, but the KSB560SM model seems to be OK. Check out Amazon to see the bad blender and compare it to the good one, which is only a little more expensive and still qualifies for Amazon’s FREE SHIPPING.