Frozen margaritas are like snow-cones for grownups, and they’re just the tops in the summer – with Tex-Mex, by the pool, on the deck, wherever. The restaurants typically use large commercial machines that make gallons of the stuff at a time with perfect taste and consistency. It seems like a breeze to make, doesn’t it? Add ice and margarita mix, blend, and pour. But if you’ve ever tried to make your own frozen margarita at home, you know that it’s a little trickier than that.

There are a whole bunch of new contraptions on the market that claim to make perfect margaritas and other frozen drinks. They use ice-shaving blades instead of regular blender blades, they have special insulated containers, they have separate motors for mixing, they’re really big, they have spouts, and a host of other innovations. The Nostalgia Electrics Margarator is one of these specialized blending machines that claim to make a perfect margarita. Unfortunately, you’ll be hard-pressed to find anything perfect about the margarita that this machine can make. 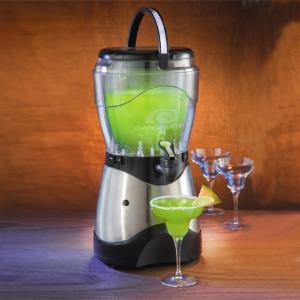 No matter how you cut it, crushed ice is not shaved ice

Here’s what an ice-shaver is supposed to do: introduce ice into a channel that’s blocked by a spinning ice-shaving blade. Then the ice has no choice but to be shaved into thin, consistent slivers before being shuttled off to the mixer. Here’s what a blender does: chops up ice into smaller and smaller pieces until you have an assortment of ice chunks ranging in size from pebbles to peas.

Guess which one the Margarator is? Yup, it’s a blender. You’ll get a cold drink full of ice, for sure. It’ll be chewy and crunchy and it’ll get stuck in your straw. If that’s your thing, this is the machine for you. If you prefer these kinds of textures – smooth, thick, creamy, like soft-serve ice cream – it’s not possible with this machine.

Built to last until the second use!

The Nostalgia Electrics Margarator scores well in the pitcher area. The walls are thick and insulated, and they’ll keep your drinks cold for a while. The lid’s pretty sturdy. All of this is just like a blender. What’s not like a blender is a convenient spigot on the front that lets you fill up a glass without having to touch the pitcher. This is really nice for when everyone’s lost the ability to pour. Unfortunately, it doesn’t work because it’s the wrong kind of plastic.

Plastic’s not all bad. All of my lawn furniture is made out of plastic, and other than one chair that an intoxicated pal deliberately broke for the sake of making a funny video, they’ve stood up to freezes and blistering sun quite well. But then there’s the cheap plastic that you find all over the dollar stores and in kids’ fast food meal toys. The “Made in China” plastic.

The spigot is made of the cheap, dollar-store type plastic, and it’ll drip from the first use until you finally just give it up. You can try mashing and bashing it closed – won’t work. Sometimes if you pull the spigot open all the way and just let it snap back into place with its own force, it’ll close. I imagine you can do this three or four times before the whole spigot breaks, if you’re lucky that it lasts that long.

Oh, you just got a bad model, you say. But customer service has a different story. If you call them up, they know what’s wrong because they deal with it a lot. They just won’t fix it. They’ll send you a new spigot, though.

Motor burns out far too often

The motor is another feature that earns the Margarator a big failing grade. The point of a blender is to blend. To do that, you need a working motor. Unfortunately there are a whole lot of bad Margarator motors out there. Maybe yours will burn up after one use, maybe three. Maybe you’ll be able to use it for a whole month before the drive train snaps. You could start a pool with your family and place bets on which week the Margarator will decide to quit working.

Oh, and even when it does work, there’s an automatic shut-off feature that is supposed to protect the motor. Problem is, you can’t use household freezer ice because it’s too big and it’ll trigger the shut-off. So you need to pre-crush your ice in order to blend it.

Unlike the Margaritaville series, where you measure the mix based on the number of drinks and the machine automatically shaves enough ice for you, the Margarator is a guessing game. Measuring mix isn’t a problem, but adding ice is. Ice floats, so it’s going to be difficult to blend all of it, and you can’t measure ice cubes. If you crush your ice first, it’ll be easier to measure and blend.

Not a popular product

There are some people that are thrilled with their Margarator. They must have good motors, but I don’t know whether they have leaky spigots. Here’s what some people say:

How to get one

I suggest you don’t. But if you must, then don’t want until the summer to start using it. Run a few batches immediately so that when it breaks, you can send it back!