Is this the Panasonic SD2501-WXC the perfect Breadmaker?

The Panasonic SD-2501WXC Breadmaker is easy to use, well made and possibly the best breadmaker I’ve used to make beautifully fresh homemade bread every day!

I bought a new Panasonic SD-2501WXC Breadmaker from Amazon to replace our Panasonic SD-253.  The only reason it needed replacing was because the pan had become scratched by a well intentioned relative using a knife to get the bread out of the pan.

Having previously owned a Panasonic breadmaker, which served us well over a number of years, it was an easy decision to go with the SD-2501WXC.

So what does it do?

It does everything you’d want a breadmaker to do and so much more. This Panasonic breadmaker is supplied with a fairly decent recipe book which contains instructions for making everything from Brioche and Pizza dough to Jam and fruit compotes.

My main use for it though is to make a reliable, tasty, loaf of bread every day. I hate supermarket bread. It’s soft and insubstantial and doesn’t really taste of anything. Even the so called “fresh” bread from the in-store bakery is generally pre-baked, frozen and then “baked off” each day.

In contrast, the bread from this Panasonic SD-2501WXC Breadmaker has a nice crust, tastes great and doesn’t disintegrate when you try to butter it. Most of the time we use the quick bake 1h55m program.

But, isn’t it difficult to make your own bread?

Not with this breadmaker it isn’t.

Wait about 2 hours as the house fills with the smell of freshly baked bread and you’ll have a perfect loaf every time. 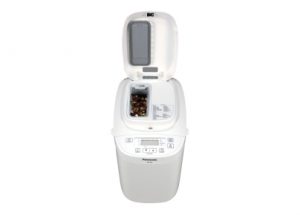 Use Ingredients at Room Temperature

Personally, I’ve found that using cold water straight from the tap may be too cold – resulting in a loaf not rising enough. Using water that’s slightly warmer than room temperature seems to produce much fluffier, lighter, and consistent bread. Also, if you’re using a whole grain type flour, or a coarser grain flour, this can break up the gluten strands, again causing the loaf not to rise as much as you’d expect.

To start with, follow the instructions supplied exactly, too much water will make the dough too wet and the bread won’t rise properly. Ideally your ingredients should be at room temperature, but that said, this machine is pretty forgiving. Put the yeast into the pan first and then the rest of the dry ingredients. Finally the water (or water and milk mix goes in last). Ensure that you add the liquid gently as you don’t want the yeast and water to mix too early on. It sounds more complicated than it is, but really, after you’ve used it for a while it becomes almost second nature to bung all the ingredients in, select go and forget about it until the house is filled with the smell of bread and machine is beeping at you to say it’s ready.

The bread from this top selling Panasonic SD-2501 WXC breadmaker is delicious. You’ll wonder how you ever managed to eat the rubbish they sell in the shops. There is, however, a downside – certainly for the first few months everyone in the house will be eating more bread than usual!

When done, remove the bread as soon as possible

Once the bread is ready make sure to take it out of the machine as soon as possible. If you leave it in for too long after it’s ready, the bread will steam in the pan and the crust will go a bit soggy. The pan will be VERY hot so use decent quality oven gloves, particularly if you have someway to carry the bread before you can tip it out.

The coating on the pan of this SD2501 is massively improved over the previous model that we had, so getting the bread out is really very easy. Turn the pan upside down and give it a quick shake. Sometimes the paddle will get stuck in the bottom of the loaf, so either wait for the bread to cool or use a wooden implement to dig it out. Again I’ve found the hole to be left where you take the paddle out to be much smaller than with the previous version.

The timer works just fine. Basically set it to start in X number of hours time. So, for example, if you’re setting it up at 10pm and you want bread for 7am, set a 4 hour bake program to start in 5 hours time (at 3am) so you can take the bread out at 7am.

Note the comments below though a bout the timer only being available with certain programs – not the “quick bake” or dough only programs.

Look after the pan! Never use anything metal to dig the bread out – this will destroy it. Never use anything abrasive to clean it. Simply fill the pan with warm soapy water, leave for a few minutes and then gently clean with a sponge or cloth. Don’t submerge the pan in water – this will wreck the bearings. Before replacing the SD-253, we did consider simply replacing the pan – it came out at between £60 -£80 – so look after it.

This is at the top end, price wise, for breadmakers and with good reason – it consistently produces decent bread, is easy to use and if looked after, should provide years of reliable service.

If you want good quality bread, want to know exactly what’s in it and don’t want to spend ages faffing around making it, then this is the breadmaker for you.

I deliberated for ages, but eventually chose to buy this one from Amazon .

It’s worth bearing in mind, that whilst you may save money in the long run, the cost of the breadmaker has to be taken into account. The main thing though is that the quality of what you’re eating is so much better for relatively little effort. I think I can probably get the bread in in less than a minute now that I’ve been doing this for a while. 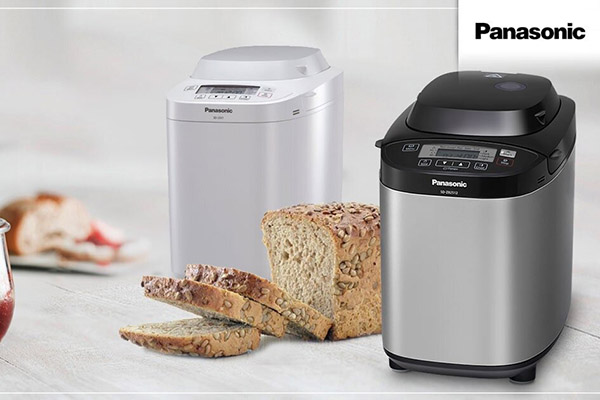 – Similar to the SD2501WXC except doesn’t have the automatic raisin and nut dispenser. Typically £30 cheaper than the SD2501.

– Top of the Panasonic range, coming in at about £180, the only discernible difference is the styling and the fact that this has a yeast dispenser, giving slightly more control over when the yeast is added.

Other Reviews for the Panasonic SD2501-WXC

A sample of reviews from other purchasers:

Buy none other because – this is the business!

Quite an expensive machine, and worth every penny. It really does make superb, delicious bread. That’s a promise.

I love it, definitely worth buying.

So, what do you think?

I’d love to know what you think of this stunning bread machine. If you have an opinion or would like to contribute your own review of the Panasonic SD-2501WXC Bread Maker, please do feel free to leave a comment.