The Philips Powertouch PT720 electric shaver is the cheapest in Philips’ new Powertouch range, and might well be the place to turn to if you just want a simple shaver. The Philips Powertouch Pro PT920 that we reviewed last month was excellent. The PT720 is definitely more on the basic side for an electric shaver, so we’re wondering if it can really hold up when compared against the PT920. First we’ll take a look at what the PT720 has to offer, then we’ll find out how it performs!

As I mentioned, the Philips Powertouch PT720 is not a flashy shaver by any means. Philips have very much stuck to the basics here, and that’s reflected in the price. Online, the PT720 can be had for well under £40. So what’s it got under the hood? 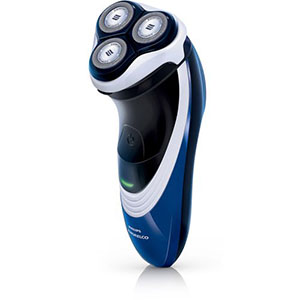 First off, the Philips PT720 is packing Philips’ own patented Super Lift and Cut technology. This means that the shaver heads in the 720 are dual bladed. The first blade gently lifts each hair away from the skin, while the second blade cuts. It’s an excellent shaving technology that most Philips shavers have built in, and generally receives very good remarks about the close shave that it provides.

The Powertouch PT720 also has the dynamic contour-following technology built in as the PT920. This means that the shaver heads can pivot around the full spectrum of movement, in order to adapt the shape of your skin, face and neck. Following the curves of your features helps to maintain optimum contact between the shaver and skin, helping the shaver to cut closely and also reducing friction, and skin burn.

Also built into the Philips Powertouch PT720 is a “QuickRinse System”. This simply means that the shaver can be washed in water. This makes it easy to clean after shaving; simply pop open the head and run it under the hot tap after shaving.

The battery in the Philips PT720 is Lithium Ion. This means that the shaver won’t slow down as the battery runs out of juice; instead it will continue to operate at the same speed and power until the second the battery runs out. It will last for up to 40 minutes, and it takes around 8 hours to give it a single charge.

So what exactly is the difference between the PT720 and the PT920? Well, the PT920 is the better all-round shaver, with more advanced features. The main differences are:

On the whole, customers were satisfied with the PT720, with 66% of buyers rating the shaver with 4 or 5 stars. Around 30% of customers gave the PT720 a middling 3 star review. Let’s take a look at some of the common things that were said about it.

A lot of customers said that they found the PT720 to be great as a back-up to wet shaving, as a cheap shaver to have around when they didn’t have enough time for a wet shave. Most of them were very happy with the quality of the shave they got from the PT720, saying it left them with smooth skin, and a comparable shave to a more expensive electric shaver.

“for a dry Philishave razor about the home, this PT720 does the business of shaving as well as far more expensive Philishave models and comes with a two year guarentee, so for that reason it is very good value”

Almost everyone mentioned that, while the Philips PT720 is quite bulky and chunky, that it is very lightweight and easy to hold. In fact, quite a lot of customers found the bulkiness of the unit a plus, as it made gripping it while shaving more comfortable (although this obviously depends on your the size of your grip).

A lot of users also mentioned that they found the ease of cleaning the Philips Powertouch PT720 very handy. As mentioned, a lot of people tended to use the shaver when they were low on time, and being able to easily rinse it under the tap was quick and easy.

Many customers also praised the Lithium Ion battery, as it meant that the shaver didn’t lose speed or power as the battery drained. This is definitely a plus for those who often forget to charge it up – it’s never fun to have a shave with a drained shaver that is too slow and tugs at the hairs instead of cutting! You won’t experience this problem with the Philips PT720, a definite feather in its cap!

“on the plus side, this shaver feels ok in the hand and it’s rechargeable, but on the downside, not so effective with a heavy beard. A good one to have at work if you want to neaten up before a meeting, or for a younger shaver perhaps”

There were some often mentioned negatives to the PT720 though. The most often mentioned criticism was the lack of a pop-out sideburns trimmer. Considering this is a standard feature on a lot of shavers, it does seem to be a big oversight.

Another bug bear was regarding the battery. Although customers were very happy with the performance of the battery, they were less pleased with the time it took to charge. To give the shaver a full charge for 40 minutes shaving time, takes about 8 hours. Compare this next to the PT920, which charges in around an hour, and you can see there is quite a big difference. Whilst this might not be a problem for some, if you’re the kind of person who forgets to charge your shaver the Philips PT720 might not be a great option!

There were also a few reports from men with thick beards saying that they found the shave to be ineffective. They were in the minority though, most men found the shave more than adequate, however it might be worth avoiding the PT720 if you do have particularly heavy stubble.

Overall, the Philips Powertouch PT720 is a bit of a mixed bag. It’s cheap and performs well for the majority of men, but on the other hand takes a very long time to charge and lacks a pop-out sideburns trimmer. For that reason, it’ll get a middling 3 stars from us. You’ll need to weigh up those pro’s and cons for yourself if you’re thinking of buying the Philips PT720; if you want a cheap backup shaver, or perhaps a first shaver for your son this could be just the ticket. Those with more advanced needs might want to take a look at the excellent Philips PT920 instead.