With BOSE, opinions are divided. Most will say their headphones are slightly pricey, slightly too mainstream, and perhaps too much focused on looks rather than performance, and sadly, it would be hard to disprove these claims. With the SoundTrue range, BOSE is very much sticking to its guns, banking on a design that follows along the lines of nearly every other in-ear buds that brandish the logo, namely Freestyle, Sound Sport and Quiet Comfort. What this review sets out to do is look into what, if anything, SoundTrue brings new to the table, and whether or not it’s true to the brand, or to sound in general, as its name suggests.

In terms of design, the SoundTrue is probably best like the Sport IE2 before it. They’re made for those who don’t want bud tips jammed into their ears, and to that end, the buds are designed to fit loosely, held in place by the wing-shaped StayHear tips. Some say they’re shaped like shark fins, and while visual impressions differ, tactile ones do not. The tips are so smooth, flexible that you’d be forgiven for forgetting that you have them on. 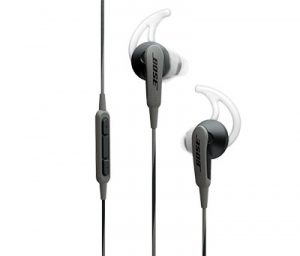 The audio-only model comes in three colours, namely White, Black and Cranberry red. The iOS version has a total of five colour themes; the three mentioned above, and two others, which are the Ice Blue and the Indigo versions. The Samsung Galaxy model is only available in black.

The earphone housing is made entirely of plastic, with the BOSE logotype printed on each earbud. Depending on the colour theme, the cables will swirl around each other with the visual effect of a candy cane stick. An in-line remote on the cord enables phone conversations and music playback. To switch between music and calls, simply press the middle button, which is slightly raised. like the other two.

It’s remarkable that all in-ear BOSE headphones are so much alike, and without the rectangular carrying case, which has something special from one model to the next, it would be hard even for an owner to tell a Freestyle from a SoundTrue model.

The sound is, without a doubt, smooth. Bass and detail seem to carry just as much weight with the SoundTrue, and both are given a decent amount of attention. As you’d expect of in-ear headphones, though, the sound isn’t particularly refined. Even though they’re open, the bass is full-bodied and round, and the mids are smooth. It’s not necessarily ‘Sound True’ as much as it is ‘true to life’, and that’s something that anybody who’s not an audiophile is bound to appreciate.

As for noise isolation, not much of that goes on here, nor indeed, should it be expected to. Some sound isolation can be achieved, but only when the right size ear tips are fitted. They’re not suitable for noisy environments, but they will do you proud on a commute. The sensitivity is rather high, but as a datasheet had not been published with details as to impedance and sound pressure level, the values are unknown.

Much like other headphone manufacturers, BOSE claims that SoundTrue features what it likes to call “TriPort Technology”, which is supposed to allow sounds to flow naturally at any frequency, without any boosts required. The sound reproduction is particularly good, so BOSE’s claims aren’t necessarily farfetched. Your equalization software will be pleased to know that you’ll hardly have to tamper with it for a good response.

The grand unboxing reveals a matching carrying case, a warranty, a manual, registration information, a shirt clip, and two pairs of ear clips, one small and one large. These StayHear ear clips with wing-like design mold to the ridges in the ears, and they are remarkably comfortable to wear, but users occasionally complain about the tips, which may delve too deep into the ridges of smaller ear lobes. The default medium ear clips can be replaced with the large or small variety provided. 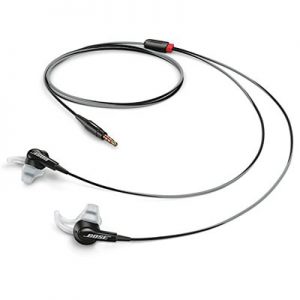 The SoundTrue features a straight connector jack for smartphone cases with both small and large headphone jack cutouts, which is a step forward from Bose’s classic angled jacks, that didn’t fit all smartphones very well. Even though different SoundTrue versions will work with different operating systems, the basic functionality, which lies in making phone calls with the SoundTrue, is maintained across all models. So, although using the remote won’t have any effect on incompatible devices, you should still be able to make your phone calls undeterred.

Of course, with the SoundTrue, it’s all about the ear buds, and these are comfortable, secure and sweat-resistant. The integrated remote and the light and spacious carrying case round off the package beautifully. As expected, the remote will not work with Android or Windows phones, which is a serious let-down, considering the price of these ear buds.

What it all boils down to with the Bose SoundTrue is comfort and design. It’s not so much a matter of sound quality, though it’s not necessarily a setback either; quite to the contrary. It’s certainly not a matter of price, considering there are many other headphones out there with a more budget-friendly approach to pricing. Still, if a sportsy headset with a contemporary design is what you’d like to try, then perhaps the Bose SoundTrue is probably one of the best candidates for that position.

It’s not necessarily a sports headset and you shouldn’t expect to be able to use them with intense workouts, especially as they’re not wireless. Still, they will take on nearly any type of light exercise you may need to have on a daily, basis, such as a quick jog to catch the train, and they wouldn’t fall out if you paid them. That loyalty and reliability is sure to count for something, and that’s why we give the BOSE SoundTrue two thumbs up, much like the hoards of online reviewers and shoppers who concur on the topic.