Logitech is a Swiss global provider of personal computer and tablet accessories with over 30 years of experience. It’s a household name, and hardly anybody could deny owning at least one product brandishing their logo. Their products are known for their durability, excellent build quality, and innovative designs, and the G230 is no exception.

The mainstay of these headphones is their suitability for gaming. With a lightweight design, sturdy frame, and crisp sound quality, the Logitech G230 gaming headsets offer a unique and immersive gaming experience; or at least, so Logitech claims. Extremely comfortable, with 90-degree swivelling ear cups, the G230 headphones are claimed to be perfect for gaming “addicts” and weekend gamers alike.

The previous G series had such a great response and was so popular worldwide, that Logitech decided to not only continue the G series, but to also improve it. The new series sports a more futuristic design, with better build quality, improving durability while focusing on a lightweight frame and comfort. 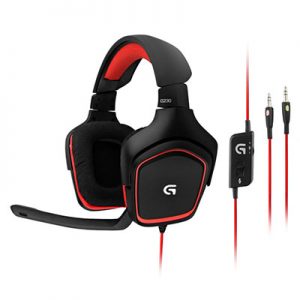 The G230 is no different from the rest of the bunch, with a futuristic, solid, but at the same time, lightweight design. The adjustable frame incorporates high quality metals, so you don’t need to worry about breaking them after repeated adjustments. The ear cups swivel to 90 degrees, which means they will lie flat on your couch, table or gaming set-up. This feature makes them perfect for storing, as well, as they fit in your travelling bag or backpack effortlessly. The swivelling ear cups are made of high quality and durable plastics, with stylish chrome branding on the sides, as well as a nice red trim around the edges, that really add to the futuristic design. The G230 has an in-line volume control remote, which is pretty much a necessity for gaming headsets, with a volume dial and microphone ON/OFF switch. They also have a long red cable cord that complies with the red trim theme of the entire ensemble.

The ear cups have soft, removable padding, that boast mesh technology, or as Logitech calls it, ‘performance sports cloth’. This implementation or performance sports cloth on the ear cups padding and the headband padding makes for a comfortable fit. The G230 headsets have a looser fit than most headsets, one that allows for perfect airflow, reducing the risk of heat pocket buildup, which would cause you to sweat during longer gaming sessions. The ear cushions are easily removable and replaceable.

The G230 headsets also incorporate an adjustable and flexible microphone that allows you to personalize your headsets for instant gratification. It’s made of premium materials, very flexible yet durable, to avoid wear and tear. Logitech G230 is perfect for youtubers, gamers and streamers. So if you like to stream live or just enjoy a good gaming session, then the G230 headsets are just what you need for good quality sound on both headsets and microphone.

The G230’s are closed headphones, so they keep sounds and noise from leaking both in and out. They are perfect for gaming in noisy environments, such as you’d have with younger siblings or children running around the house at all times. You literally only hear the sound output of the headphones and nothing else. This is where most gaming headphones fail, as they either leak sound in or are so tight that they could potentially hurt your ears, or at least create discomfort. Due to Logitech’s implementation of the aforementioned mesh technology, the soft and comfortable ear cushions fit perfectly around your ears. This is why the G230 gaming headsets, along with all other G series headphones, are so popular among gamers and youtubers, as well as streamers.

The Logitech G230 headphones have a tremendous frequency response ranging from 20Hz up to 20Khz, which means that you will hear every sound that the game throws at you, amped or not. Some last-gen games, as well as almost every next-gen games, focus mainly on sound quality, spewing out high quality sounds that it would be a shame to miss simply because you’re not wearing these headphones. Wasting a good game on a pair of standard earphones is something akin to madness. This is where the G230 headphones shine, with powerful neodymium drivers and a high frequency response, delivering clear and rich sound playback.

The folding and flexible microphone incorporates noise-cancelling tech, so if you want to use your G230 headphones while streaming from home, or on the road, at events or gaming meets, they are perfect for recording your footage without having to worry about noise leaks from your surroundings.

Logitech has a good reputation for releasing high quality gaming equipment and accessories. The G230 headsets are no different, setting a standard when it comes to accessible gaming headsets. Logitech managed to squeeze into the G230 its trademark 40mm neodymium drivers, which deliver that tremendous stereo sound quality that makes for an immersive gaming experience. 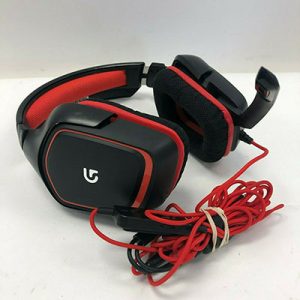 As previously mentioned, the mesh tech, or as Logitech calls it, the sport cloth design, is the first feature that stands out from the crowd, apart from the overall futuristic facelift of the G230 headphones. While sound quality is the ultimate trait when it comes to these gaming headphones, comfort is a close second. The mesh tech combined with the light-weight design of the G230 makes them extremely comfortable to wear for long gaming and streaming sessions.

In a nutshell, this is a single corded headset, with analog 3.5 mm jacks, on-cable controls, noise cancelling capability, and rotating boom. The G230 are dedicated to systems running on Windows 8, Windows 7, Windows Vista, and Windows XP, but expect them to work well with an Apple computer, as well, if you have the right adapters. Not much more can be said, except perhaps that they’re every gamer’s dream.

The Logitech G230 gaming headsets incorporate new technology, innovation and futuristic design, as well as excellent audio quality, while somehow still resembling its predecessors from the previous Logitech G series. So Logitech has managed to take something good and make it even better, improving both sound performance and design. Such a courageous leap didn’t go unnoticed, as it seems that the new G series, with the G230 headphones as the flagship, are still popular and appreciated globally for their high quality and performance.